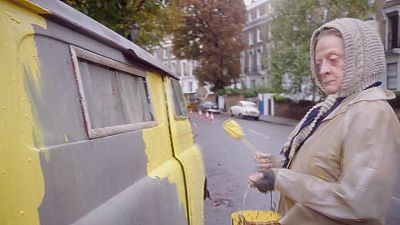 ‘The Lady in the Van’ is the true story of Alan Bennett’s strained friendship with Miss Mary Shepherd, an eccentric homeless woman whom the British playwright befriended in the 1970’s. Bennett allowed her to temporarily park her van in the driveway of his London home, where she eventually stayed for 15 years.

At the movie’s European premiere at London’s Film Festival, director Nicholas Hytner, also a successful theater and opera director, had nothing but praise for his lead. A multi-award winner, Maggie Smith is best known to younger audiences as the Dowager Countess Violet Crawley in the ‘Downton Abbey’ series: “I know nobody who is able to do more with a brief moment’s silence, with a line. When she’s given material like Alan Bennett gives her, you see the art of acting at its very height. She’s rightly a legend, but she’s a legend because she can do so much with so little. She is the most extraordinary actor.”

One of Britain’s most charismatic actresses, the 80-year old two-time Oscar winner has already played the lead role of the homelass lady twice before, in the original 1999 theatrical production.

“She used to say, when she played it on the stage, that it was the most bruising part she’d ever played, literally bruising because she was always being knocked about in the van, and so on. And I think it’s not been very different in the film really, she’s quite a – it’s a very hard part,” said Alan Bennett at the film’s London premiere.

Alex Jennings plays Alan Bennett who hosted Mary Shepherd in his driveway: “The nation loves Alan Bennett, it’s a responsibility. It’s a bit weird, and he’s around all the time, when we were shooting and when I played him at the national theatre he was there a lot, so it’s a bit weird and it’s weird for him as well,” he said.

The real life Miss Shepherd lived in her van on Bennett’s driveway until she died in 1989.

Described by critics as an enjoyable adaptation of Alan Bennett’s beloved play, ‘The Lady in the Van’ will be out in the UK in November before going global in January.