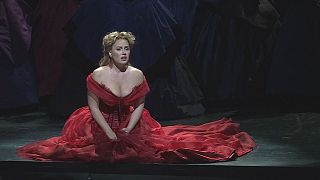 A much-anticipated new production of Verdi’s Otello has opened the season at New York’s Metropolitan Opera. It’s a lavish show full of excitement, thanks to the shimmering performance of Canadian conductor Yannick Nézet-Séguin, and the luminous Bulgarian soprano Sonya Yoncheva, who sang Desdemona.

Desdemona is far from being a wilting flower, said soprano Sonya Yoncheva: “Desdemona is a strong woman who knows exactly what she’s doing. The only thing that escapes her is the level of craziness attained by Otello. I personally think she’s very brave. Because she’s a woman in love with someone who is so different from her, in terms of mentality and background. Her greatest strength is her love for Otello. Her love is so pure that it’s untouchable. She does all she can: she defends her love, her man, to the very end.”

The conductor, Yannick Nézet-Séguin, said that Otello is one of his favourite operas of all time: “Otello is the perfect opera. It’s the highest point of Verdi’s output. With it, every rhythm, every note, every silence, is just perfect. Verdi wanted a very modern orchestration, and this was nothing like anything before, because the musical texture is uninterrupted. Even when the orchestra is not playing, one has the impression it is; it’s like a major sung symphony – everything is perfect.”

It however technically challenging, as Sonya Yoncheva explained: “This is a role written for a lyric soprano, but Verdi pushed it to the very lowest notes in our range. How to cope with the wonderful high notes in Act IV “esterrefatta fisso”? I have to say this is not too difficult for me because in another life I was a contralto, so I am delighted to go and look for those sounds down there, to use my “chest voice” and express myself with that sort of rough voice.”

Yannick Nézet-Séguin said he wishes Giuseppe Verdi were still alive. “I’d like to tell him: ‘Maestro, do you know what you did for the world?’ Because he didn’t know. Verdi doubted himself, he always did. I’d just like to sit him down and tell him how much we love him.”

Sonya Yoncheva said: “In reality, I look like a strong woman, and I feel I have to be strong and determined, but actually, I am a vulnerable person, full of doubt. In fact, sometimes my feelings almost overwhelm me, like Desdémona. I think that’s why I understand her so intimately.”