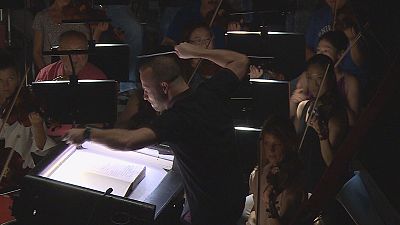 “The Met is the greatest lyric orchestra in the world. When I conduct Verdi I feel there’s such respect – a mix of tradition, of respect for tradition, and simultaneously a desire to re-think the whole score, the whole tradition, and this is absolutely characteristic of this orchestra. You also feel a sort of adoration, almost a worship for Verdi’s great masterpieces. And a technical feature of this orchestra is precision in the rhythm. Also, they sing in a way, just like the singers. There are also the rhythmic punctuations, all those accords for the strings, their accents and minimal variations: an absolute precision in the rhythm and playing nuances. Their understanding, also, of attack is unique! Which is what gives this orchestra such presence, even in a house as big as the Met, with 4,500 seats.

“Out of the variable elements I can control, I include the importance of remembering that a conductor’s job is to guide the musicians. But to do it well you have to serve the composer as well as the musicians. You have to enable them to create and express themselves in the best possible way. Which obviously means more work for the conductor in terms of listening. Lots of conductors have a clear vision of what they want, and how the music should sound, but it’s important to harmonise that with each musician’s idea of how it should be done. That requires huge mutual respect. Here, the musicians respect me, and I respect them enormously, and I think they feel that.”