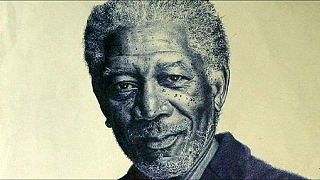 Twenty-two-year old Oscar Ukonu is putting the finishing touches to his latest piece of work, a portrait of US President Barack Obama.

The young Nigerian artist has chosen the ballpoint pen to produce his photorealistic works, an art form that has been around for more than half a century.

“What inspired me mostly is because I have seen people do it. Artisans who don’t have professional tools, but when they look around them and see something they can use, something that is available for them, they turn it into greater works that people who have the professional tools will envy them,” he explains.

Oscar has been drawing since the age of nine, but he only started using the ballpoint pen last year.

As part of his creative process, he studies a picture of his subject for a long time before putting pen to paper, sometimes using their photo as wallpaper on his computer to really connect with them.

“After getting the reference photo that I want to use, I study it for about two days. So when I’m studying it, if it is a musician, I have to listen to the music to get inspired and get connected.”

Each piece requires between 100 and 120 hours of work. Oscar Ukonu is hoping to hold his first solo exhibition next year.