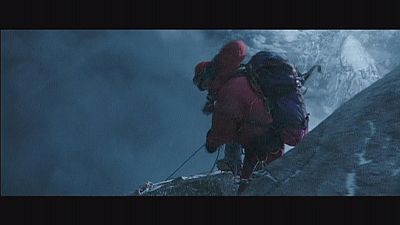 The stars were out on Wednesday for the opening night of Venice Film Festival.

Based on real-life events, director Baltasar Kormakur’s film follows two rival climbing teams caught in a blizzard while attempting to reach the summit of the mountain in 1996.

The film’s most gruelling scenes were filmed in Italy’s Dolomites mountain range and at Everest’s base camp, more than 5,300 meters (17,000 feet) above sea level to make the 3D epic as true to life as possible.

The director was quick to point out that while he pushed his Hollywood stars to the limit, they were never in real danger.

“We didn’t put anyone foolishly into danger. I think Jake (Gyllenhaal) worded it very nicely when he said ‘there’s a difference of pain and injury.’ I put them through a lot of pain, but no injury,” explains Kormakur.

It features Jason Clarke and Jake Gyllenhaal as Rob Hall and Scott Fischer, leaders of expedition groups, both of whom died in the tragedy.

The cast were more than aware of the difficulties of depicting real-life events.

“I think there is a tremendous responsibility when you’re trying to recreate something that actually happened,” Gyllenhaal explains. “I wasn’t even fully aware when I took on the role how the story had impacted Scott Fischer’s family and particularly his children, who contacted me directly and were a bit worried about how their father might be portrayed. And it was actually a beautiful thing to sit down with the two of them and to hear who their father was to them. And to feel him through them. “

“Everest,” which also stars Keira Knightley, Emily Watson, and Robin Wright premiered out of competition at the Venice Film Festival, and will be released worldwide later this month.

#Everest review: a thrilling trek to the top of the world https://t.co/AqkmPbRqZTpic.twitter.com/VMHzsAoJQa

EVEREST is a nausea-inspiring, intense thriller not for the faint of heart: http://t.co/6Kc8f2NAL4pic.twitter.com/2lLZS7TEhx