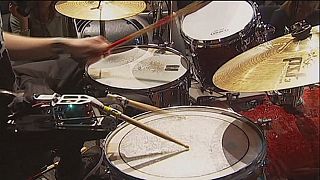 Jason Barnes’ dreams of becoming a professional drummer were shattered when he lost his arm following a workplace accident in 2012. But now he has been dubbed the world’s fastest drummer thanks to a robotic prosthetic arm. It works via EMG, or Electromyography, which evaluates and records electrical activity produced by skeletal muscle.

“So, for instance, when you play drums normally, you use your wrist and your fingers. And so that’s kind of what we recreated via EMG , so I can flex my muscle and get a loose hit. Or I can flex my muscle in the opposite direction and grip the stick to get a tight hit. Now it also has a second stick, which essentially has a mind of its own. I can create all kinds of different rhythms that aren’t humanly possible. For instance, I can play polyrhythms, so one rhythm on one stick and another rhythm on the other.”

Barnes showed off his skills at the Robotronica event in Australia. Israeli-born musician and inventor of experimental musical instruments and musical robots, Professor Gil Weinberg is the mastermind behind the robot arm.

With the addition of a second stick, the robot arm has its own musical brain, making Barnes effectively a cyborg.

“I didn’t imagine I’d have two sticks on one arm or be able play at speeds not humanly possible. But there’s a time and place for everything. (It’s) still a process right now. Still getting used to it. So, there’s no end result. You can never be too good at something. So you just keep progressing.”

Playing faster, with a more stable beat and a robotic improvisation, means that Barnes can push the barriers of music like never before.