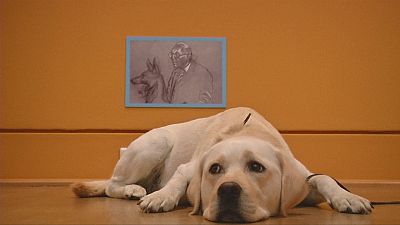 Throughout the ages dogs have been a constant companion to humankind, and a new exhibition in Berlin’s print museum brings to life the story of puppy love.

Normally the building is off limits to man’s best friend, but the museum decided to open its doors to the star attraction in the exhibition entitled ‘Gone to the Dogs’, an experience for human and canine alike.

“I was surprised, it’s the first time I’ve done a tour with dogs in the museum and the dogs were a little bit excited but none of them barked, they were all relaxed,” said exhibition curator Lydia Rosia Dorn. “Also the visitors are great people who are really interested in the subject of dogs, it’s nice.”

Humankind’s fascination with dogs pre-dates Youtube videos. The museum’s collection spans ten centuries and includes depictions of our four-legged friends by masters such as Rembrandt.

From watchdog to sheepdog the exhibition catalogues the evolving role of canines, but perhaps culture vulture is a step to far.

“I don’t know how much he is getting out of it but I think he is enjoying it. He is making new friends and also took a liking to the small pictures when he can see a picture at his level,” said one museum visitor.

The earliest genre which most frequently featured dogs was the hunting scene, it became a metaphor for human kind’s taming of nature.

“Gone to the Dogs!” is open until September 20 and if you want to give your pet paws for thought, pooches go free.