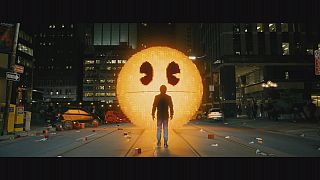 “I love being at the movie with guys my age with their kids getting to say, ‘I was great at that game.’ And their kids being excited to play it after. It’s fun,” said actor Adam Sandler.

Kevin James, who stars in the film as America’s president, commented: “I’m usually the big guy falling down on everything and really playing it over the top. And it was nice to kind of bridge that world where we are still doing a comedy, but I still got to be believable, somewhat believable as the leader of the free world.”

The real-life creator of Pac-Man gets an appearance in the film too. Speaking at the US premiere, Toru Iwantani explained the game’s success.

“Pac-Man is a gamer friendly game with tons of cute characters and that’s why it was loved for such a long time. I hope this film, ‘Pixels,’ will also be loved by families for a very long time,” he said.

‘Pixels’ is being released in cinemas around the world from now until September.