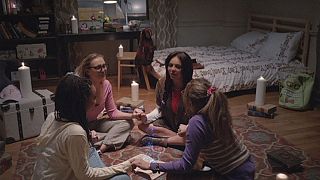 Not so Little Mix anymore, with heading towards ten million records sold worldwide, the girls, no, queens are back with “Black Magic”.

Whenever we're on stage, the songs that we like to perform the most are the ones where we can play a character, like we're a bit fierce.

In the video somehow they are still at school despite having made three albums, the latest from which the summer single is taken.

They were the first group to win the UK’s ‘X Factor’ in 2011 and in the following year they took the Spice Girls’ record for highest US entry debut. with album ‘DNA’.

Still ‘monetised’ by Simon Cowell’s Syco Music they have been successful ever since.

Jade says it is all about confidence, and “black magic is a metaphor for that.” Leigh-Anne agrees.

“Basically what it’s about is us giving the secret potion to girls all around the world which is basically a metaphor for confidence. So it’s a really positive message, it’s just a wicked summer song really and we absolutely love it, don’t we? Very catchy upbeat and Little Mix,” she says.

Little Mix are in the running for one of the sounds of the summer, and in the video getting some acting chops, too, says Jesy.

“Whenever we’re on stage, the songs that we like to perform the most are the ones where we can play a character, like we’re a bit fierce. So we muck around all the time doing silly accents and doing silly little plays and filming silly little things so to be able to act was just amazing, because we’ve always wanted to do it. So yeah we absolutely loved it and the fact that we got to play characters was even better.”

We will have to wait until later in the year for album number three;
“Black Magic” is out in the UK on July 10.