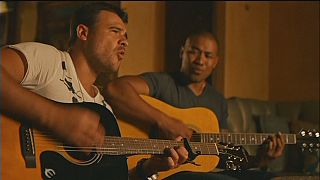 Emin is already a big act in Russia and his native Azerbaijan and the crooner believes he has the recipe to widen his appeal:
“I think I have something unique and different given, perhaps, my inheritance of the classic American songs from the best crooners of the time, with a mix of something very contemporary with contemporary production, it provides a nice middle ground where I can entertain the crowd with deep, very vocal ballads, which I have always admired and up-tempo contemporary dance songs.”

Emin is a well-connected individual he is the son of a billionaire and formally married to the daughter of the president of Azerbaijan.

His latest album ‘More Amor’ is his ninth and he believes the Russian music industry is on the march:“I could tell you that Russia is catching up artistically quite quickly, and musically especially. Because obviously we are very influenced by international music, what’s going on in America, Britain, and Europe, and obviously we hear it all on the radio. And all Russian artists, you know, have to live up to what’s there, sound-wise and quality-wise, and although these are Russian songs, they’re slightly different stylistically, but very contemporary as well.”