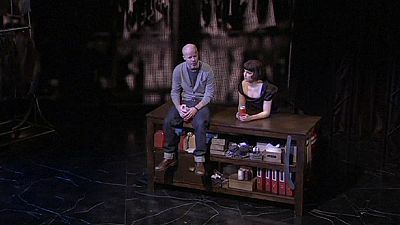 Five years after his death, it seems interest in British fashion icon Alexander McQueen is at an all-time high.

A new stage production has got underway in London, starring English actor Stephen Wight as the late fashion designer, who committed suicide in February 2010.

“There was enough pressure that I put on myself that I don’t really, if I’m honest, I don’t really care what anyone else thinks. If the family are happy and his friends and they feel that we’ve paid a good homage to his legacy and tried to tell a true a tale of Lee’s life, that’s all I really care about,” said Stephen Wight.

The play takes place over a single night and shows McQueen on the brink of suicide, winding a belt round his hand, when a young woman named Dahlia, breaks into his East London warehouse in search of a dress.

US actress Dianna Agron, in the role of Dahlia, did a lot of research into understand McQueen’s character: “What you find when you watch old footage of him – he was very spirited and jovial and comical and I think what I responded to the most was (the fact that) his journey as an artist wasn’t an easy road.”

Entitled ‘McQueen’, the play is not to everyone’s taste and has been described as a pretentious, unshapely piece (that) feels like something of a fashion faux pas by one critic.

It runs at London’s St James Theatre until late June.