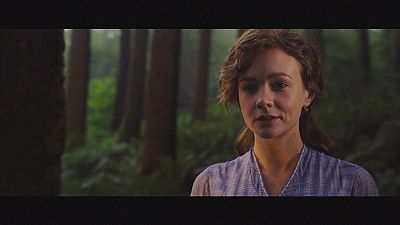 Based on Thomas Hardy’s classic novel of the same name, ‘Far From The Madding Crowd’ stars Carey Mulligan as a headstrong, independent country girl who inherits a large farm in Victorian England.

Bathsheba has her choice of three different suitors, a sheep farmer, a dashing soldier and a prosperous, older bachelor.

The Oscar-nominated actress says she was delighted to take on the lead role in this Thomas Hardy adaptation: “I was so excited to get to work on an adaptation of Hardy. I think his work is so interesting and detailed and dark in a way that a lot of (Jane) Austin… you know the Austin heroines have a slight lighter quality to them. Hardy heroines have a real depth and darkness to them.”

Since making a strong impression in the 2012 Cannes film festival hit ‘Rust and Bones’, Mulligan’s on screen romantic interest, Matthias Schoenaerts, has been shooting non-stop.

The Belgian actor explains what drew him to this role: “What attracted me the most was Gabriel, and the things he represents. His truthfulness, his honesty, his consistency, his determination, his loyalty, his friendship. Those are things that I really value in people and in life and I really see him as an example, even for myself,” he says.

‘Far from the Madding Crowd’ was last brought to the big screen in 1967 by Oscar-winning director John Schlesinger. This version is helmed by award-winning Danish filmmaker Thomas Vinterberg, who says he wanted to put a fresh spin on Hardy’s iconic characters: “Not knowing very much of Thomas Hardy before, I was overwhelmed by his descriptions of his characters, and his sort of playing around with fate, and fatalism. I thought that was very rich and he sort of reminded me that you can’t control life. It’ll easily control you, which I thought was great.”

The film has opened to mostly positive reviews with critics calling it sumptuously filmed, handsome and well played though they also describe it it as frustratingly polite adding that it could do with a little less polish.

‘Far From The Madding Crowd’ is on global release from now.