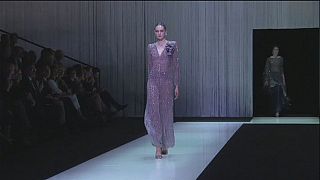 Italy’s Giorgio Armani has celebrated 40 years in fashion with a star-studded gala, a fashion show and the opening of a museum dedicated to his designer business.

The 40 minute-long retrospective show featured a selection from the collections of “Giorgio Armani Privé” , the Haute Couture line launched by the 80-year-old designer back in 2005.

“Over the years I keep returning to the house of Armani because it’s got this extraordinary melange between the masculine and the feminine. I think that’s a line that I enjoy walking, aesthetically,” said the actress.

“I bought my first Armani blazer in his boutique in New York on Madison Avenue in ’85, I think it was, so not very long after he came to our country, and I still have a closet-full of those beautiful suits, those classic suits, and I still wear them,” said Glen Close.

“He is Italy. I think he is fashion. He is an artist. He represents somebody that wants to keep and stay Italian,” said Ornella Muti.

Born into a working-class family, Giorgio Armani started out as a window dresser in Milan, before launching his own label in 1975. He has gone on to become one of Italy’s most successful designers with a fortune estimated at more than 7 billion dollars.