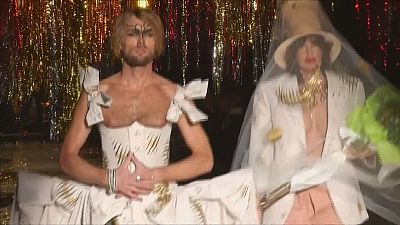 The Saint Laurent show at Paris Fashion Week was living proof that Hedi Slimane’s rebranding of the iconic Paris fashion house was the best thing that ever happened to it.

And so the show goes on, with a star-studded audience treated to an Eighties inspired punk show, featuring a lot of leather, torn-up fishnet tights, thick black eyeliner and bright red lipstick

Vivienne Westwood, the queen of punk, likes to get people talking and she told journalists before the show that that was exactly what her latest collection was intended to do.

The veteran British fashion provocateur rocked Paris with a punky collection featuring men in bodices and women in business wear, to the sound of German punk-rock duo Die Hartjungs playing live in the middle of the runway.

“What I’m saying by doing this unisex (collection) is that we’re all human beings and that women are not more human than men. We’ve all got a human humanity (sic) and I think it really does put something into the public debate,” she said.

To the sound of galloping horses, models took to the leaf-covered catwalk in chic coats, shiny leggings, A-line skirts and leather boots. The looks were completed by elegant versions of the horse riding hat, in tweed, wool and fur.