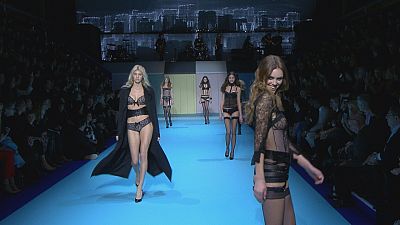 Paris Fashion Week has kicked off with a flamboyant show by French lingerie brand ETAM.

It was held at the super luxurious art deco swimming pool Molitor. Inaugurated in 1929 by Olympic-swimmer-turned-actor Johny Weissmüller, best known for his on-screen role as Tarzan, the Molitor is where the first bikini was presented in 1946.

The show opened with a classic line in black lace by Nicolas Fafiotte. It’s the French fashion designer’s third collaboration with ETAM for a collection that also includes elaborate accessories.

Famous for his wedding and evening gowns, Fafiotte is based in Lyon, a city known for its know-how when it comes to working textiles and materials.

“We have a technical expertise when it comes to materials, we are lucky to have access to many different kinds of material. There are many ways of ennobling textiles by using glitter or plastic, for example, and we have this know-how,” the designer told our reporter Wolfgang Spindler.

With more than 4,000 stores around the world, nearly 3,000 of which are in China, ETAM has seen sales soar in recent years.

“It’s not that the number of clients has grown, but the way of consuming lingerie has evolved. It used to be purely functional, and now it’s something that has also got to be fashionable and fun,” said Director General of ETAM Lingerie & Prêt-à-porter Marie Schott.

ETAM muse, Russian model and actress Natalia Vodianova, also designs her own annual collection for the brand. This year’s outfits had a very British flair.

“Its inspired by the UK so you will see a lot of Liberty prints and “lace anglaise”, a kind of easier to wear but still very fun and sort of good, happy, up-lifting mood, great colours for summer, it should be nice I hope,” she told euronews.

Master of ceremony Snoop Dogg raised the pulse at the show with a surprise concert.

A company always prepared to innovate in its quest for new markets, ETAM just launched its own make-up line. Its online service has also helped boost sales:

“We are launching a tailor-made line of underwear, so you can create your own bra or panties online. You chose the shape and each detail, whether you want lace or embroidery, what kind of completion you want… and so you get to design your bra exactly the way you want it and it will be delivered to you within a few weeks. We are the first to launch this kind of service,” said ETAM Director General Laurent Milchior.

And who better to offer an opinion on ETAM’s fashion show than former Miss France and General Director of the Miss France company, Sylvie Tellier.

“I found it very fresh, very beautiful and accessible, and I recognise the style of a creator from Lyon whom I’m very fond of, Nicolas Fafiotte, who works with us on the Miss France contest. He creates a lot of the outfits for us, and I find his work very elegant. It has a very positive energy,” she told euronews.