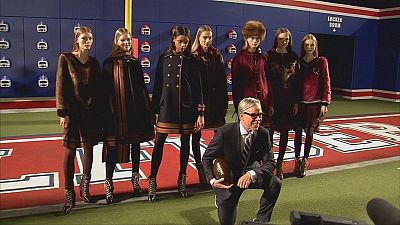 These girls got game. Thanks for a great show – TH #NYFW#TommyFall15pic.twitter.com/KjO9xVT28S

The Tommy Hilfiger Corporation marks 30 years in business this year, which its founder said was a perfect time to celebrate its American roots.

While taking his cue from the football field, Hilfiger stayed true to his signature preppy style of plaid, duffle coats and pleated skirts with a 70’s twist. Models, that included star players such as Gigi Hadid, Liu Wen and Jourdan Dunn strutted down the runway in lambskin jersey dresses and oversized capes.

The 63-year-old described how he mixed luxury fabrics – cashmere, mohair, alpaca, silk, shearling, and fake fur – with football boots to give an athletic twist.

Our favorite fashion forwards on the front row at #TommyFall15#NYFWpic.twitter.com/En3twOmcPZ

“You know, it’s always an inspiration for me. New York for me means the world. It’s not about New York, and it’s about where women are at today, their chaos of life they live. And it’s my job to dress and address the issues that they need.”

In metallic brocades and gun metal silk, Karan’s signature line did the city’s skyline justice with geometric planes of fabric that flowed loosely on dresses and coats. Touches of organza danced down the runway against her backdrop of the city at night.

The collection was a mixture of fabrics, asymmetrical cuts and loose garments. The color palette didn’t stray from classic cold weather staples of beige, black and grey and was punctuated in places by splashes of turquoise, purple and red.

The line is for the woman on the move that needs a versatile wardrobe for her day to day life.

a href=“http://www.nytimes.com/interactive/projects/cp/inside-fashion-week/fall-2015” rel=“external”>More on NY Fashion Week from the New York Times==

From Anna Kendrick at the Golden Globe Awards to Julia Louis-Dreyfus at the Screen Actors Guild, celebrities are showing the love for designer Monique Lhuillier.

While Lhuillier has had many recent wow moments on the red carpet, she says dressing the first lady Michelle Obama is one she will never forget.

She also debuted her accessories line, which included strappy heels and shiny clutches.