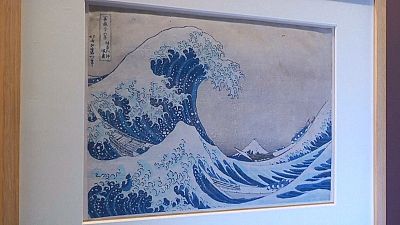 Katsushika Hokusai’s ‘The Great Wave off Kanagawa’ is one of 500 of the painter’s works currently on display at the Grand Palais, Paris.

The Japanese artist is best known as the creator of the 1820s print series ‘Thirty-six Views of Mount Fuji’ as well as other iconic Japanese landscapes.

Laure Dalon is the curator of the Paris exhibition.

“We only know a few works by this artist, such as ‘The Great Wave’, or the ‘Views of Mount Fuji’, and a few others for those who are experts”, she explained.

“What we really wanted to show is a complete retrospective. To demonstrate that behind this very emblematic and famous ‘Great Wave’, there are many works of great cultural wealth.”

Hokusai’s interest in the ordinary made him stand out from his contemporaries. He often painted scenes depicting daily life in Japan on a variety of social levels.

Dalon believes he is as relevant today as he was in the 18th and 19th centuries.

“I think he is an artist who is totally able to inspire today’s creators”, she says. “Because, there’s a real freedom and modernity in his work, in his brush stroke, in the way he drew… He would take possession of the motifs without worrying about their crudeness. There’s a real modernity in his connection to the world.”

The exhibition marks the first time such a comprehensive amount of the artist’s works have left Japan. And it may be the last time. Some will take up permanent residence at the Hokusai Institute, due to open in Tokyo in 2015.