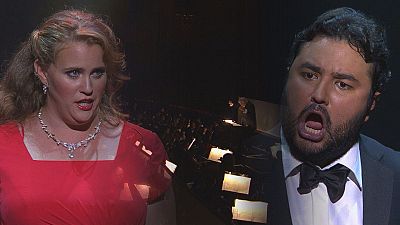 Operalia is a pinnacle for aspiring opera performers and can be a launchpad for illustrious careers in the field. The singing contest is staged every year in one of music’s world capitals.

This prestigious competition took place recently in Los Angeles, where Placido Domingo, its founder and president, is also music director of the LA Opera.

Among some 1,000 entrants, just a dozen get to the finals.

Being among them is already a victory and can lead to an international career, as Domingo explained:“I don’t really worry that not all finalists win, it wouldn’t be possible anyway. But here the jury is made up of personalities from the greatest theatres in the world, and I’ve just been told that a couple of singers who didn’t get a prize left with three contracts in their hands. So, nobody is left to their destiny here!”

Among the distinguished jury members is Marta Domingo, Placido’s wife and reputed stage director. “The female winner is just wonderful,” she enthuses. “She has a great career in front of her, because she can sing Verdi as well as Wagner! And I find it amazing that someone who’s not hispanic can sing ‘zarzuela’ (Spanish-style operata) at her level! As for Mario Chang, he’s got a marvellous voice, he’s an authentic tenor, a charming personality as well”

Chang told euronews: “Getting to this point was not easy… leaving Guatemala, to begin with. There, operas are sung but unfortunately there’s no opera house. With my wife, who’s a singer too, I made a promise to my country: every year, in the cathedral of Guatemala City, we give a concert for people, for free… and I’d like to consider myself as a promoter of opera in Guatemala.”

For Rachel Wills-Sorensen, the female winner, Operalia was a dream come true: “Maestro Domingo told me that in “Dich, teure Halle” [you, dear hall], I could have more freedom in the soft passages… that he would follow me! Imagine? Imagine Placido Domingo who says he’ll follow me! I’m dreaming, I must be dreaming, but it happened! [Wagner’s] “Dich, teure Halle” is my gem! OK, it’s stigmatised as this really difficult, heavy piece, but the secret is it’s the easiest aria in my repertoire… shush! don’t tell!”

Operalia is a family affair for the Domingos, who are great servants to their musical field.

“My grandchildren are amazing, they already love music so much!” says Placido. “And both of them today were following the competition with such interest!”

“And they cast their vote,” adds Marta.