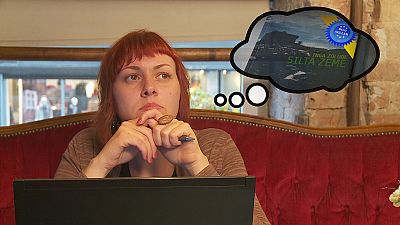 Writing is a solitary game, where the goal is to get your work read by as many people as possible.
For most authors the dream is to get your books out into the big wide world, but when your native language is little-spoken outside your own country, getting your prose to travel is not exactly easy.

Generation Y traveled to Riga to meet Inga Zolude, a 28-year-old Latvian writer, who was one of the winners of the European Union Prize for Literature last year.

“I think there should be an interest in Latvian literature because Latvian Literature is unique, it is different and specific, it’s very high quality literature. I hope that the time when it is fully discovered on a bigger scale is approaching,” she says.

That is what this is all about. The European Prize for Literature aims to promote the circulation of books in a continent where the diversity of languages is often a barrier.

Every year, the 12 winners of the award are chosen by national juries, people who know the language.
Neither the writer nor the publisher may submit work, so both are surprised by the news!

First of all, winning an international award helps a writer get more readers in their own country.

For instance, Inga won recently a national award.
But getting the book onto the international stage is a more complex task.

“The first problem is translators, as Latvian is not one of the more widespread languages of the European Union. So the first problem to deal with is to find translators and then financial support for the translation,” says publisher Dace Sparāne-Freimane. [dace.sparane-freimane@dgramata.lv]

Getting a first novel published abroad is still, for the time being, a fantasy. But the project is rolling. A translator has been found, Suzanne McQuade, an American editor who has lived in Latvia.

“These countries are post-Soviet countries and people have a perception of them that is very dated. I believe it is really important to look to young authors because they offer an entire new perspective that we have never seen,” says McQuade.

Translation is only the first step. Suzanne has to find a publishing house to take it on.

She plans to convince some publishers to apply for EU Grants for Translations. This is a programme that promotes the circulation of literary works between countries.
But the Holy Grail of the English-language market is hard to crack.

“English readers tend not to read translated literature. I also think it is a problem that it is not published very often in English. So I do think it is more important for publishers to get involved in translating more literature from other countries,” insists McQuade.

Generation Y met the Director of the Latvian Literature Center at the city’s new national library, a modern cultural symbol of Riga.

For Janis Oga, who promotes Latvian literature abroad, translation grants are important but beaurocracy may be an obstacle.

“In small publishing houses there are very few people and few staff. Usually they are run by creative people, poets and writers themselves. When it comes to filling the application form with more than two pages it can be a real challenge for them,” she says.

Very often small publishing houses are the ones that reveal little-known treasures of foreign literature, allowing the reader to travel to a new world where language is no longer an obstacle.

Every year the European Prize earns 12 writers preference in the EU support for translation programme.

“I think that art and literature, once translated, is a universal language,” says Zolude.

Though her three books are yet to be fully translated into other languages, you can sample Inga’s work on the Generation Y website, where you will find excerpts of her work in several languages including English, French, and German. There are also signed agreements to publish her novels in Bulgaria, the Czech Republic and Denmark.

Neil Gaiman's secret: 'You put one word after another until you are done'