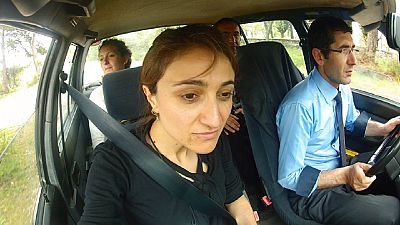 Turkey is the youngest country in Europe. The average age of its population is below 30.

It is also the most ancient. An invaluable cultural heritage is concentrated there.

Try now to imagine all this heritage covered by water.

This is what happened to Allianoi, an archaeological site from the Roman era flooded last year by the construction of an irrigation dam.

Archaeologist Ahmet Yaras tried for years to save the site. A handful of intrepid diggers, from different cities and different backgrounds, came all the way to Allianoi to support him.

“At the end of my first year of Architecture at university I went to the bulletin board to see my results and saw this little poster. It said, ‘Looking for architecture students who can make drawings of the Allianoi site to save it from a dam’,” says 32 year-old Onur Karahan.

“I was hosting guests and people interested in history and taking them here to visit Allianoi. And I have witnessed, along with my guests, Allianoi going under water little by little,” says Nesrin Ermis, 28.

Different backgrounds, different stories, but with the same angry feelings about the outcome. Because, they say, economy and culture are not necessarily meant to collide.

They lost their battle, but now they have won something else. The Allianoi Initiative is one of 28 projects awarded this year’s European Union Prize for Cultural Heritage. Europa Nostra is the foundation charged by the European Commission with organising the selection.

“These archaeological sites, this cultural heritage is our future, not only for young professionals working on the issue of archaeology, architecture, and cultural heritage, but for society itself. Unfortunately the kind of bad result like Allianoi maybe demotivates young people, but we shouldn’t be demotivated and we should work for the next step,” said Europa Nostra’s representative in Turkey Baris Altan.

Actually these people are far from demotivated. They never get tired of telling their story, and the Allianoi campaign has inspired the struggle by tens of thousands against 1,300 new hydroelectric stations and dams all over Anatolia.

The best-known site threatened by a dam is the breath-taking Hasankeyf village, in the south-east of Anatolia. Other sites, like Zeugma, have already been flooded.

The authorities say that in 50 years the Allianoi dam will be closed.

“Fifty years later the lakebed will be covered by mud completely, hence I am guessing reaching Allianoi will be really hard. But if something like that happens of course I will try to do everything to help Allianoi,” said Hasbi.

“Young generations should know their past better. People who do not know their history cannot recognize the value of their current life and cannot see their future,” said Nesrin.

Nor, without the work of dedicated volunteers like these, would people be able to marvel at the treasures saved from the waters now going on display.

Friendship from a common cause