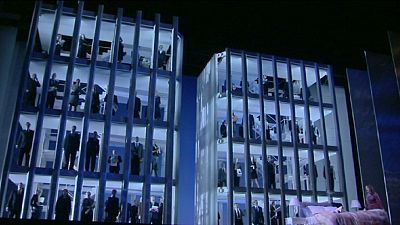 A new opera premiered in San Francisco on the eve of the anniversary of the 9/11 attacks telling the story of one of the heroes.

But Heart of a Soldier goes beyond simply the events of that day 10 years ago. It is a story of friendship, war and love in the compelling life of Rick Rescorla, a brave and selfless man.

“I think it’s important to stress it’s not just a 9/11 story, because there are issues of: what is America, what is our place in the world, how do we honour all of those who have fallen and died in the name of democracy, the issue of Christianity and Islam, why did 9/11 happen, what is the heart of a soldier?” she said.

Rick Rescorla was in charge of security at Morgan Stanley bank in the South Tower. He managed to evacuate 2,700 people. But when he went back in for a final check – he never came out.

Baritone Thomas Hampson sings the Rescorla role. “The thing about heroes is that they are very normal people who have at the right moment, at the necessary moment, the fortitude to trascend everything that they would know as life because of the crisis, the danger, the necessity of the protection of life that they are involved in,” he said. “Rick Riscorla did extraordinary things, it’s a great story, but he was just a person you’d like to be around, he was a nice man, he was a good man.”

The opera also tells the story of the friendship between Rick and his battlefield companion from Africa and Vietnam — Dan Hill.

Rescorla’s personal life took a new turn when he encountered true love with his soul-mate Susan, although by then he was well into middle-age.

“They’re people in their fifties; we’re all looking at operas where Mimì and Rodolfo (La Bohème) are running off in their twenty-somethings, what about people in their fifties?” asked Zambello. “That’s an average age of our audience! So I think it’s very hot and exciting to see these people discover themselves at 58 and 50, and come together.”

But that morning of Sept 11, 2001, under an impossibly blue sky, the life of Rick Rescorla and several thousand New Yorkers was tragically cut short.

“I think that he had no choice, it was never in his consciousness to not go back in that building and get the people out,” Hampson added. “I honestly believe he thought he had time. No one believed that those towers would come down by one o’clock in the afternoon. Rick went in because he was not one hundred percent sure that every human being in his charge had a chance to get out of that building, and he was still walking, he was still able, he was still strong – this was Rick Rescorla.”

In this edition of Musica you can hear excerpts from Heart of a Soldier, an opera by Christopher Theofanidis and Donna Di Novelli.