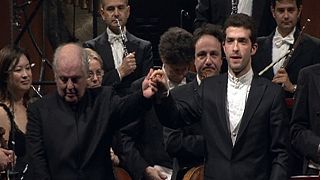 At La Scala in Milan Daniel Barenboim has been back on the piano stool, playing Franz Liszt’s piano concertos with the Orchestra Filarmonica. As 2011 is the 200th anniversary of the composer’s birth, the classical music world has gone down with Lisztomania.

‘Musica’ was invited to film both rehearsals and the concerts themselves and meet the Filarmonica’s young, talented, guest conductor Omer Meir Wellber.

His admiration for Maestro Barenboim dates back to his childhood.

“Barenboim is someone that as a child I remember, we even planned our family’s trips to Europe on the basis of his concerts: ‘Let’s go to Paris because Barenboim is there! Let’s go to Munich…’”

Wellber explained: “Becoming his assistant, and even more than that, having the opportunity to be next to someone like him, is something that changes your life completely. I’m talking not only about music, but also politics, and a lot of other things.

“To have a Maestro makes a great difference. He’s very generous! So, as an assistant, if you want, you can have everything: you can study, you can learn… he will give you a lot of time!”

However as Wellber notes, being a sorcerer’s apprentice means you have to come up with some magic of your own one day.

With such a talent at the piano, and one who is normally employed conducting orchestras himself, how does Wellber see his role in the process?

“I’m privileged to try and bring him and the orchestra as close as possible. Actually, a lot of things come naturally because the moment the pianist starts to play, and you feel immediately some kind of articulation it changes the next bar of the orchestra, because they listen and they see. On the other hand, I think you have to create also some kind of atmosphere here, articulation there… this is too loud, or too fast…

“I want him to be as much as possible in a “homogeneous” environment, as he says all the time: ‘everybody will think the same, it doesn’t matter what each one does, we all think the same, we all go in the same direction’. I’m not completely there yet; he is, obviously – but at least I’m trying!”

In this story you can hear parts of Franz Liszt’s Piano Concerto No. 2.