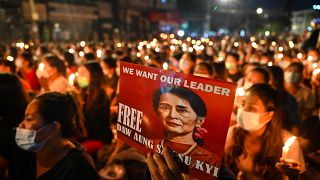 Hundreds defied a curfew in Yangon to hold vigils in honour of those killed in demonstrations against the military.

People sat in the middle of the street, holding candles and singing songs.

Demonstrations have continued in the country since the military seized power in February.

At the funeral of 25-year-old Chit Min Thu, crowds held up a three-finger salut in a show of resistance.

He was shot dead on March 11 in the North Dagon township of the commercial hub during clashes with security forces.

Several deaths have been reported amid a harsh crackdown on protests by security forces.