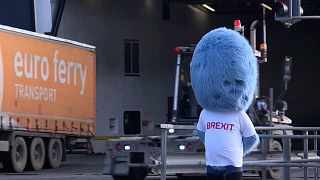 'Brexit monster' warns of horrors ahead at Dutch port

With the transition clock ticking down, a "Brexit monster" made its first public appearance at the Dutch port of Rotterdam.

Its message: from January 1 drivers will be denied entry onto Britain-bound ferries and stranded in a huge lorry park if they have not completed new customs procedures.

Officials say the new customs controls are coming regardless of the outcome of trade deal talks between London and Brussels.

Europe's largest seaport handles up to 4,000 trucks a day going to and from Britain, a major trading partner for the Netherlands.

The monster — in reality, a man dressed in a furry blue suit with staring eyes and a white t-shirt saying "Brexit" — was unveiled by the Dutch government last year to symbolise difficulties caused by Britain's EU exit.

The beast has since become a cult figure in the Netherlands and Britain, appearing in short videos in which it variously gets in the way of traders, lorry drivers and the Dutch foreign minister.

On Tuesday, with a minder helping it from falling over in strong winds, the monster handed a leaflet to a government minister for the cameras, before pretending to give directions to lorries being unloaded from a huge ferry.