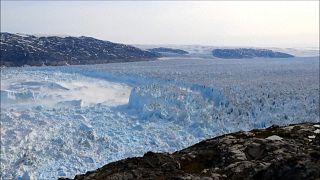 Research shows that the three largest glaciers in Greenland could melt faster than even the worst-case warming predictions.

The world's ice sheets in Greenland and Antarctica have become the largest sources of sea level rise.

A team of researchers based in Denmark and Britain estimated how much ice was lost from the glaciers in the 20th century by using historical images and other data.

They found that Jakobshavn Isbrae lost more than 1.5 trillion tonnes of ice between 1880-2012, while Kangerlussuaq and Helheim lost 1.4 trillion and 31 billion tonnes from 1900–2012, respectively.

"The worst-case scenario is underestimated. Ice loss may be anywhere from three or four times larger than previous predicted for the thee glaciers considered in this study," Shfaqat Abbas Khan, a researcher at the Technical University of Denmark, told AFP.