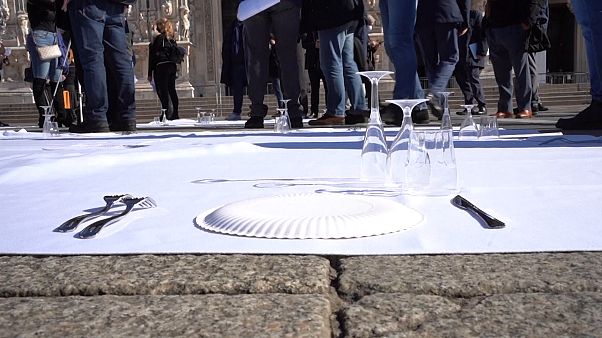 It comes as the country implements early closures for bars and restaurants and shuts down gyms and swimming pools to stem the growing number of coronavirus infections.

FIPE, the Italian Restaurant Owners' Association set up a protest on Wednesday in Pantheon Square in Rome, putting tablecloths with dishes and glasses on the floor and playing the "silence", used by the army for funerals.

Leader of right-wing opposition party the League, Matteo Salvini, showed up at the protests and talked with some FIPE members, saying he wanted to "bring solidarity" to the restaurant owners.

Some participants confronted him, saying he was not respecting social distancing rules with journalists and people.

In Milan, a few dozen protesters set up a symbolic restaurant table in front of the iconic Duomo.

At the same time, dozens of theatre workers staged a sit-in in front of Rome's main theatre "Teatro Argentina", in Rome.

They called for the venue to be reopened and for "national protocols" ensuring public and workers safety.