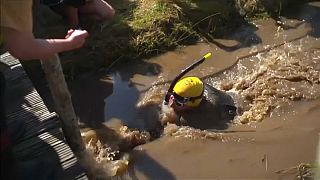 Brave swimmers took the plunge into the murky, stinky waters of the Waen Rhydd peat bog to compete in the World Bog Snorkelling Championships in Wales on Sunday (August 25).

The 176 competitors, many dressed in comedy costumes, swam two lengths of the bog measuring 55 metres without using conventional swimming strokes through the boggy, brown slush in the 34th running of this annual event.

The snorkellers pay to take part in the quirky contest that began after a conversation in a local pub when a charity was searching for some fundraising ideas.