While France was in a prolonged state of emergency following a spate of terrorist attacks the Fête des Lumières was cancelled in 2015.

The following year, the festival went ahead though reduced in scope and with a heavy security presence.

Whilst security is still heightened this year, it's not dampened the spirits of festival goers.

Each night this year, 970 police are being deployed along with 200 soldiers, 200 private security guards and 160 firefighters. Meanwhile, from the sky, an army drone with the latest surveillance technology will keep a close eye on proceedings.

Random ID checks and searches are being carried out at 41 entrance points in Lyon’s central peninsula where the festivities unfold.

The local prefecture warns that 'anyone who refuses to be controlled or show their papers will be systematically denied entrance.'

For those hoping to pick up a bottle of wine, better make it a plastic bottle as all glass bottles are strictly prohibited.

The French state of emergency was partly rendered permanent by being inscribed into common law ‘droit commun.’

'And so in this context, if you accept being searched you can go in and if you don’t accept it you don’t get in. We’re here first and foremost for the festivities and all our work whether it be the City, the state, the justice system, is to make sure that this festival is a success and that it amazes people.'

Mayor of Lyon, Georges Képénékian, launched this year's festivities on the Quai des Celestins, watched by visitors from around the world.

'It’s our first time at the Fete des Lumieres. We have just seen the show in the Old town ' Magnifique.' said Felipe from Brazil.

Agathe from the South of France said 'I think it’s really something to do, to see. It’s really super pretty.'

'Discovering the city especially with the lights, it's extremely beautiful and it gives you a chance to see the beauty of Lyon.'

You can browse through pictures of the festivities below. 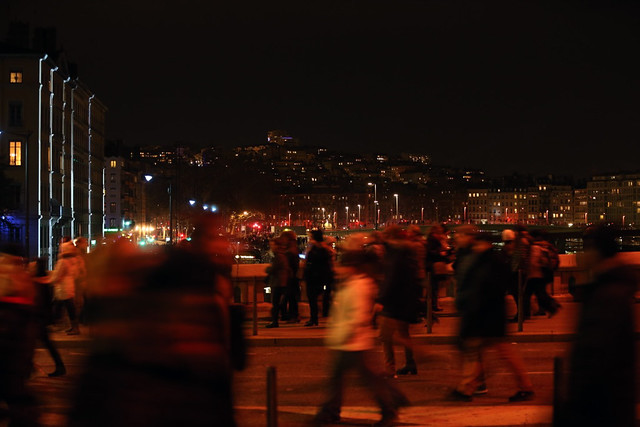