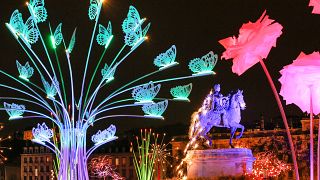 The city of Lyon, France will be lit up by spectacular light shows from Thursday for the annual Fête des Lumières (Festival of Lights).

Around one million visitors a day are expected to descend upon the city centre for the event.

Over four nights, around 50 installations by a variety of different artists will light up buildings, streets, squares and parks all over the city.

The origins of the festival date back as far as the 17th century when France was struck by plague. On September 8, 1643 local officials promised to pay tribute to Mary if the town was spared.

Ever since, a solemn procession makes its way to the Basilica of Fourvière on December 8 (the feast of the Immaculate Conception) to light candles and give offerings in the name of Mary.

The event gained traction in the 19th century. On September 8, 1852, as Lyon was preparing to celebrate the installation of a statue of the Virgin Mary in the Chapel on the Fourvière Hill, the ceremony had to be abandoned as the River Saône was overflowing.

The festivities were postponed to December 8 that year. But a violent storm broke out during the day, and the event had to be abandoned. As night fell and the weather improved, the population spontaneously lit their homes with candles and Bengal lights and hurried down into the street.

Since then, the ritual has been repeated every year, with the people of Lyon decorating their windows and balconies with thousands of candelights.