The man wrote “good morning” in Arabic on a picture of himself in front a bulldozer at the West Bank settlement where he works. But Facebook’s automatic translation software incorrectly traduced his caption to “attack them” and “hurt them” in English said Israeli newspaper Haaretz.

Israeli police took the wrong translation as a threat since bulldozers have been used in past terrorist attacks. They suspected he was threatening to carry out an attack and arrested the man.

But after questioning their suspect, authorities realized their mistake and released the man after a few hours.

Arabic speakers told Haaretz that the English transliteration created by Facebook’s translation software is not an actual word in Arabic but could look like the verb “to hurt.” Any Arabic speaker would have known the translation was incorrect, said the Israeli daily, but no Arabic-speaking police were consulted before the arrest.

To avoid any further confusion, here are the English translations of both Arabic phrases 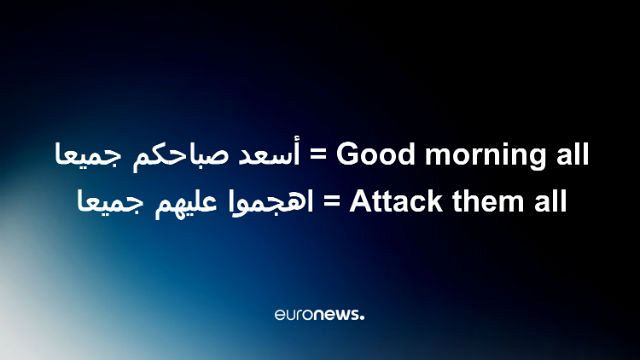