Albanian hotel owner Kujtim Roçi will never forget 1992. It was the year his eldest son Elesio was born and when he started his small beachside business in the coastal town of Golem.

Shortly after the fall of communism, Roçi decided to transform one of the bunkers on Golem’s beach into a bar in an effort to make some money to get through the hard times. While many of his friends laughed at the idea, the business quickly started to grow.

The bar became a restaurant, which then grew into a three-story hotel built around the bunker and named after his eldest son.

“This piece of concrete made me who I am now,” says Roçi, showing off a piece of the bunker still visible from the entrance of the hotel.

The bunker that Roçi developed his business empire around is just one of thousands of concrete shelters across Albania – an enduring remnant of the communist era.

In fear of foreign invasion, Albanian communist leader Enver Hoxha commissioned the construction of 173,371 of the structures between 1975 and 1983 for Albanians to hide in and fight from.

The attacks, however, never happened.

In fact, it was only when Albanians like Roçi started turning the bunkers into beach bars, restaurants, storage units, dog kennels and museums that they were actually put into use. 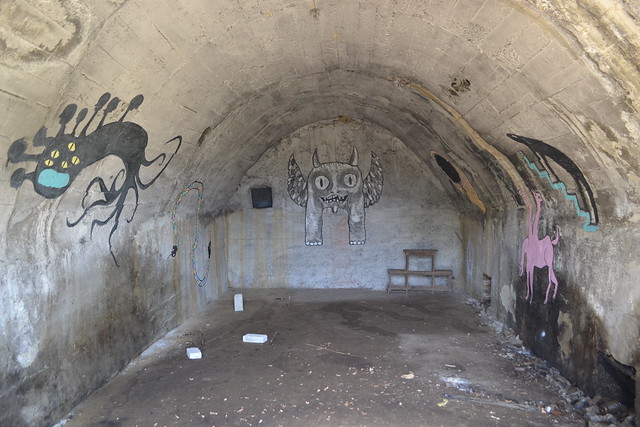 In 2014, a huge bunker on the outskirts of the capital Tirana became the “Bunk’Art:”http://bunkart.al/ museum.

Originally built for Hoxha and his associates, the hidden complex has become a cultural space where exhibitions, performances, and concerts take place. It now attracts scores of tourists and is ranked Tirana’s number one attraction on TripAdvisor.

Following the success of Bunk’Art, its operator, Albanian association Qendra Ura, opened another museum called Bunk’Art 2 in the centre of Tirana in November 2016.

The site of the second museum is a former anti-nuclear bunker belonging to the Ministry of Internal Affairs. Bunk’Art says it is one of the finest pieces of evidence of Hodxa’s “bunkerization” project.

However, construction of an artificial dome-shaped entrance to the museum was delayed by political protests against what some called “nostalgia for violent past times.”

To combat this perception and to reclaim the bunkers for modern Albania, several local artists have also used bunkers to promote messages of positivity and prosperity.

The Treffpunkt Bunker project, led by a group of German students, gathered together several Albanian artists who each painted and re-designed different parts of a bunker on a hill overlooking Tirana.

“Even if there was so much sadness and so much distress at that time, people had still found ways to enjoy life and I wanted to capture my memory of that time,“ says one of the artists, Stela Sulioti, who deliberately used only bright colours in her design.

He says that some bunkers, which were vandalized and destroyed following the collapse of the communist regime, should be left alone.

“It shows the anger people had with our communist past and our economic difficulties so that they took everything they could from them like furnishings, electrical wires, air filtration materials or even the bricks,” he explains.

But Sula thinks that bunkers still in a good condition could help the economy by being transformed into indoor farming areas, refrigeration rooms, cinemas, hostels, exhibition halls and workshops.

“It would increase employment, boost tourism and generate the economy of the areas where bunkers are located,“ he says.