In this edition of Aid Zone euronews visits Kenya and the refugee camp in Kakuma.

There are over 16 million refugees worldwide and over a half are children. Six million are primary or secondary school age.

Kakuma is among the largest refugee camps in the world. It hosts around 162,000 people, mainly from South Sudan and Somalia.

It’s also the camp with one of the highest numbers of unaccompanied and separated children. 14,000 minors have come here alone or with relatives, but without their parents.

Kakuma is taking special care of them. Primary schools here have an average of 140 students per class, in the rest of Kenya the standard is 40. In spite of that, the camp has a 96% pass rate, the highest in the county.

“Today we are talking about 76% enrolment in primary schools alone, but then we have a big percentage that are above the school going age. Forty percent of our learners are actually over age,” explained Collins Onyango, LWF Programme Manager.

Gatkuoth is from South Sudan, he is 18 and is in 6th grade which is intended for 11 year-old-children. In his class there is also a 45 year-old-student.

“I was in a bad situation, my mother died in 2000 and my father had not a good job. That’s why I stayed at home for seven years without school. I came to learn at school. I want to know everything about this world,” he told euronews.

Gatkuoth also lost his father during the civil war in Sudan. To reply to situations like his, the EU Humanitarian Aid department has financed an accelerated education programme implemented by the Lutheran World Federation, that runs Kakuma’s 21 primary schools and its five secondary schools.

Euronews reporter Monica Pinna spoke to Jean-Marc Jouineau, EU Humanitarian Aid : “There are some adults in primary schools but mainly children who have lost up to seven years of school because of the war?”

“Absolutely, they have lost many years and what we do is to try to offer them an adapted education in a way that they can do the usual eight years of primary education in four. This way, we accelerate the process in order to let them catch up and later maybe access secondary education,” he responded. 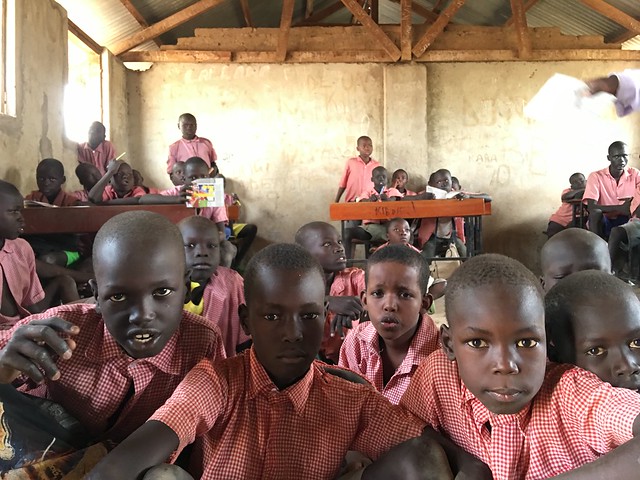 The camp’s child care system ensures that unaccompanied children receive the appropriate support. Gatkuoth was placed into a foster family belonging to his same tribe in South Sudan.

He has seen murders and fights which resulted in him suffering from trauma. He also has a temporary hearing impedment. In spite of the efforts at the camp, the situation is tough for him and his new family.

“Fostering Gatkuoth is difficult because it’s not easy to obtain enough money to support him and also my own children. The solution could be to take him to the boarding school where he could forget his trauma,” explained Dabora Nyanyuon his foster mother.

Euronews visited a more remote part of the camp in the early morning and one of Kakuma’s boarding schools. It is a special one, as it is intended for girls at risk.

Students of the primary school funded and supported by the actress Angelina Jolie have already stood out for their results in national exams. Education makes the difference for these students with a difficult past.

Rose, South Sudanese is 15-years-old and is one of the 250 students at the school. She was brought by force to the camp. She has now found a place where she is safe, and where she can attend a high level school for deserving students.

“There is a man who was our neighbour. He kidnapped me and he brought me here in Kakuma. I asked him about school, I told him I want to learn. He told me he did not bring me here to learn. He brought me as his wife,” she added.

Each girl has a past to overcome and, thanks to education, new opportunities to look ahead. In about three years, the accelerated learning programme is expected to move the majority of the over-aged students to higher education. The challenge is to find the resources to build new schools and raise the secondary education enrollment rate over the current two percent.