So much for the end of history. Twenty-seven years to the day after the fall of the Berlin Wall heralded the collapse of communism in Europe, Donald Trump’s election as US president endangers the liberal international order that his wiser, broader-minded predecessors crafted.

Trump’s “America First,” anti-“globalist” agenda threatens protectionist trade wars, a worldwide “clash of civilizations,” the peace in Europe and East Asia, and further violence in the Middle East. His nativist and authoritarian views also undermine the shared values, faith in liberal democracy, and assumption of benign American hegemony on which the rules-based international system depends. Already in relative decline, the United States is now poised for an angry retreat from the world.

Optimists hope that Trump didn’t mean what he said during the election campaign; that he will surround himself with seasoned internationalist advisers; and that his wilder instincts will be tempered by the checks and balances of the US political system. Let’s hope so. But nothing in his temperament suggests as much. And with Republicans retaining control over both the Senate and the House of Representatives, Trump will have a freer rein than most presidents. That is especially true in trade and foreign policy, where US presidents enjoy much greater discretion – and where the damage he could do is potentially huge and enduring.

Start with trade. Globalization had already stalled in recent years. Now Trump threatens to throw it into reverse. At the very least, his victory kills off the faint hopes of concluding the two jumbo trade deals that Barack Obama’s administration had been negotiating: the completed but unratified Trans-Pacific Partnership (TPP) with 11 Pacific countries, and the stalled Transatlantic Trade and Investment Partnership (TTIP) with the European Union.

Trump has also pledged to renegotiate the North American Free Trade Agreement (NAFTA) with Canada and Mexico. Worse, he wants to slap tariffs on Chinese imports, which would doubtless provoke a trade war. He has even spoken of pulling out of the World Trade Organization (WTO), the multilateral rules-based trading system.

Such an agenda would not only threaten a global recession. It would also tempt regions to split into rival trading blocs – a worrying prospect for a post-Brexit Britain seemingly intent on tearing itself away from the European Union to go it alone. In Asia, the collapse of the TPP, from which the Obama administration unwisely excluded China, paves the way for the Chinese to build their own trading bloc.

Trump’s victory threatens East Asia’s security as well as its economy. By retreating from free trade and casting doubt on US security guarantees for its allies, he could prompt Japan, South Korea, and others to race to acquire nuclear weapons to protect themselves against a rising China. The Philippines is unlikely to be the last country in the region to conclude that cozying up to China is a better bet than relying on an increasingly isolationist America.

Trump’s victory also undermines Europe’s security. His admiration for Vladimir Putin, Russia’s authoritarian leader, is alarming. Putin laments the break-up of the Soviet Union, wants to recreate a Russian sphere of influence in the country’s neighborhood and has already invaded Georgia and Ukraine. Trump’s suggestion that his commitment to defending NATO allies is conditional invites Putin to go further.

The Baltic republics of Estonia, Latvia, and Lithuania, NATO members that were once part of the Soviet empire and have substantial Russian minorities, are most at risk. While a common external threat ought to drive the EU to increase defense spending and deepen its security cooperation, EU-skeptic, austerity-hit European voters may have little appetite for this. Indeed, many European governments seem tempted to seek to appease Putin, rather than stand up to him.

Trump’s outright racism, hostility to Hispanic immigrants, and Islamophobic rhetoric threatens a culture clash – and even violence – within America. It could also set the stage for the “clash of civilizations” of which the late Samuel Huntington warned. Bullying Mexico to try to force it to pay for the huge border wall that Trump wants to erect would be an act of hostility against all Latinos. Casting Muslims as enemies – and denying them entry to America, as he vowed during his campaign – would be a powerful recruiting sergeant for the Islamic State and al-Qaeda, as is suggesting that the US ought to seize Iraq’s oilfields for itself. 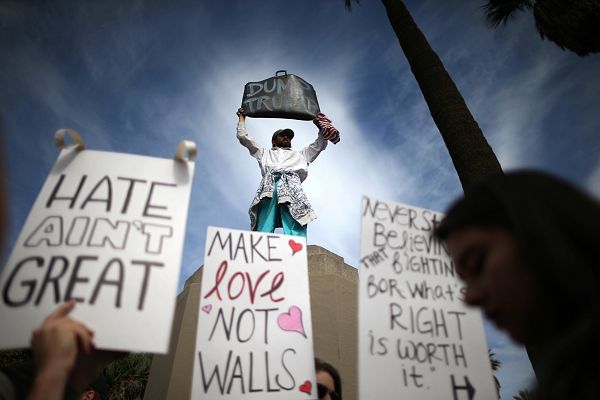 Perhaps the most enduring damage will be to America’s soft power and the appeal of its liberal democracy. The election of a racist president with fascist tendencies is an indictment of America’s political system. Trump himself has shown himself to be contemptuous of democracy, saying he would not accept the election result if he lost and threatening to jail his opponent. Chinese officials will not be alone in thinking that a system where lies, hatred, and ignorance trump sober deliberation is defective. America is no longer the “shining city upon the hill” that successive presidents have proclaimed it to be.

Anti-establishment insurgents now have the wind in their sails. In the wake of the financial crisis and wrenching economic change, many voters have understandably lost faith in Western elites, who seem incompetent, corrupt, and out of touch. They also, wrongly, blame immigrants for their problems and feel threatened by social liberalism. In the absence of positive alternatives to a deeply flawed status quo, the risk of an even greater backlash is high. Unlikely as polls now suggest it is, Marine Le Pen of the far-right National Front may well win France’s presidential election next May. That would deal a hammer blow to the euro, the EU, and the West.

Liberal internationalists cannot afford to be complacent. Trump’s victory is a disaster – and it can get much worse than this. We need to defend our open, liberal societies and offer positive changes to win back anxious voters.

Philippe Legrain, a former economic adviser to the president of the European Commission, is a visiting senior fellow at the London School of Economics’ European Institute and the author of European Spring: Why Our Economies and Politics are in a Mess – and How to Put Them Right.