Do any of these words ring a bell? If they do, you are probably a Scrabble aficionado or champion.

Sanchit Kapoor, 16, is one of the latter. India-born Kapoor has just won the Youth Scrabble Championship held in Lille, France, from August 27-29 and open to seven to 17 year olds.. It was just one event among others in the Mindsports International 2016 Championships.

It's official! Sanchit Kapoor of the #UAE is the 2016 world youth #Scrabble champion .. History in the making pic.twitter.com/UN7aTQNC7o

Hasham Hadi Khan, 10, from Pakistan, finished first in the under-14 category and seventh overall.

The tournament was played in English, if the words above left you in any doubt! A hundred and seven youngsters, coming from more than a dozen countries such as Australia, Hong Kong, Pakistan, USA and Canada, Thailand or Sri Lanka competed for the title.
Contrary to certain Scrabble championships, this Mindsports International Scrabble 2016 edition was played home-style: the players drew letters from the tile bag and were not presented with the same random letters.

Scrabble is open to all the world’s variations of English. Many of the most unsual words used – and accepted by the official Scrabble dictionary – are coming from cultures linked to the commonwealth: for example Maori words are therefore included, as are archaic words.

Meanwhile, next time you want to beat your grandma and that stranger on the Scrabble app, get inspired by watching these youngsters games. 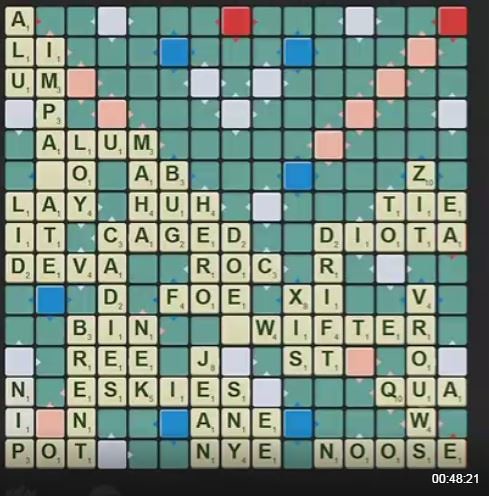 And we could not possibly leave you without giving you the meaning of the words quoted at the beginning of the article (definitions mostly coming from the Collins or Scrabble dictionaries):