NASA’s New Horizons probe has flown past Pluto for the first time, marking a historic moment in the exploration of our solar system. The spacecraft took images and surveyed the dwarf planet, and will be slowly sending back data to scientists on Earth over the course of the 16 months. So what have we learnt about Pluto so far?

Pluto is diverse and colourful

The first images of Pluto coming from New Horizons show this dwarf planet and its large moon Charon to be more diverse than expected. This isn’t a boring lump of ice on the edge of our solar system, but something far more interesting. Before arrival at Pluto, it was known that it was generally a kind of rusty-red, but these exaggerated colour images show how certain areas of the dwarf planet are a light peachy colour, other areas are bluish, and there is a mid-latitude band of pale blue and red. Charon, which is also shown in exaggerated colour, appears to have dark red hydrocarbons on its northern polar cap, but much more mottled and varied features at lower latitudes. “These images show that Pluto and Charon are truly complex worlds. There’s a whole lot going on here,” said New Horizons co-investigator Will Grundy, Lowell Observatory, Flagstaff, Arizona. “Our surface composition team is working as fast as we can to identify the substances in different regions on Pluto and unravel the processes that put them where they are.” Scientists will be studying the images from Pluto to work out what may be within the interior of the dwarf planet, and to see what kind of effect solar radiation may have on the surface. 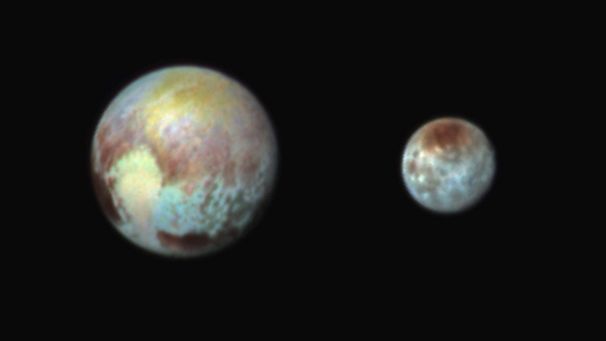 Pluto has a ‘heart’

Pluto has a large heart-shaped formation on its surface, with a very smooth area to the west and more bumpy terrain to the east. The feature is thought to be over 1,600 kilometres across, and dominates the side of the dwarf planet that New Horizons was able to see. As Pluto rotates once every 6.4 Earth days, and the NASA spacecraft only spent a few hours flying past and imaging the planet in close proximity, we won’t have a chance to see what’s on the other side. But the detail already coming down is intriguing, and as Planetary Society blogger Emily Lakdawalla said, “In the span of a few days, Pluto and Charon have turned from spots to worlds”. It now appears from New Horizons that Pluto has a distinct polar cap made of methane and nitrogen ices. The nature of the heart-shaped area will be uncovered slowly in the coming weeks and months, but its form has already sparked a wave of jokes and doodles drawing comparisons with Disney’s famous cartoon dog, Pluto, including a rather nice one from webteamsix.net. The dwarf planet actually takes its name from the Roman god of the underworld. 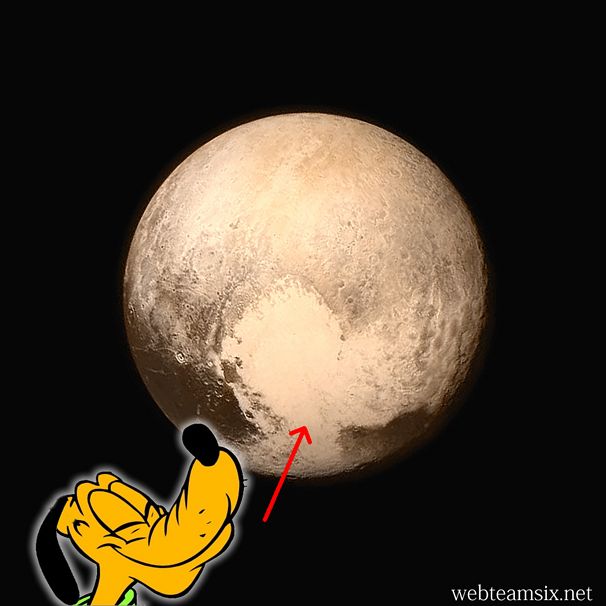 Pluto is bigger than expected

Pluto has proven itself to be a little larger than thought, although that doesn’t mean it is going to get away from its ‘dwarf planet’ tag anytime soon. The body has a diameter of approximately 2,370 kilometres, which means it is bigger than dwarf planet Eris and can be considered the largest known object in the Kuiper belt, a vast zone of icy relics at the outer edges of our solar system. The fact that Pluto is larger than thought means that it is probably lower density than was previously considered to be the case, so that means there could be more ice inside than predicted. It also means that any tenuous atmosphere on Pluto is also thinner than previously thought. However, all these observations remain to be qualified, refined, discussed and debated over the course of the next few years, as the data from New Horizons trickles back to Earth. Pluto will remain a dwarf planet because it does not have a clear orbital path around the Sun. 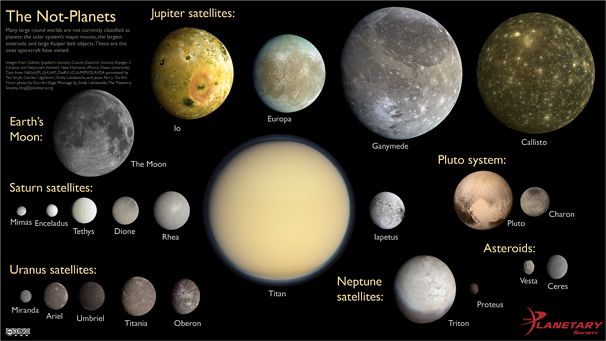 Pluto can raise the political pulse

Pluto set the news media and political twitter feeds abuzz this week. The flyby story was the most-read on the euronews.com website, and top rated on many other general and specialist news websites. The historic encounter stoked up a huge range of tub-thumping tweets and messages from scientists and politicians, including US President Obama, who tweeted “Pluto just had its first visitor! Thanks @NASA – it’s a great day for discovery and American leadership”. NASA chief Charles Bolden also saw this as an opportunity for some all-American back-slapping, “This is a historic win for science and for exploration. We’ve truly, once again raised the bar of human potential,” he said.

Meanwhile the man who drove the whole project since its inception, New Horizons principal investigator Alan Stern from the Southwest Research Institute in Boulder, Colorado said: “Following in the footsteps of planetary exploration missions such as Mariner, Pioneer and Voyager, New Horizons has triumphed at Pluto. The New Horizons flyby completes the first era of planetary reconnaissance, a half century long endeavour that will forever be a legacy of our time.” In a NASA wary of budget restrictions and cutbacks, this is being seen as a great chance for the American space agency to celebrate its achievements and promote its agenda of further exploration of Mars, near Earth asteroids and the Moon.