A mysterious tunnel discovered in Toronto near one of the venues for this summer’s Pan American Games contained a rosary with a crucifix and poppy, and did not appear to be linked to criminal activity, police said on Tuesday.

Police said they had no idea who built the tunnel or why, saying “there’s nothing illegal about digging a hole” as they appealed for information from the public.

While the discovery of the tunnel initially led to speculation about possible terror links, police downplayed the risk and public focus quickly turned to jokes about Toronto’s overheated housing market and failed efforts to expand its subway.

The hand-dug tunnel, which ran for about 10 meters (33 feet) and was large enough for an adult to stand in, was discovered Jan. 14 in a wooded area near Rexall Centre, a tennis stadium at York University that will be used for the Pan Am Games in July.

“If you built a tunnel near the Rexall Centre in #Toronto give us a call, k?” Toronto Police Sergeant Chris Boddy tweeted.

Reinforced with wooden walls and ceiling supports, the tunnel had electricity supplied by a generator, a sump pump to remove water and a pulley system to remove dirt. Toronto police said it likely took more than one person to build.

Police found the rosary with crucifix and a poppy nailed to one of the wooden supports. Such synthetic red poppies are widely distributed in Canada in November as an annual symbol of remembrance for soldiers lost in combat. 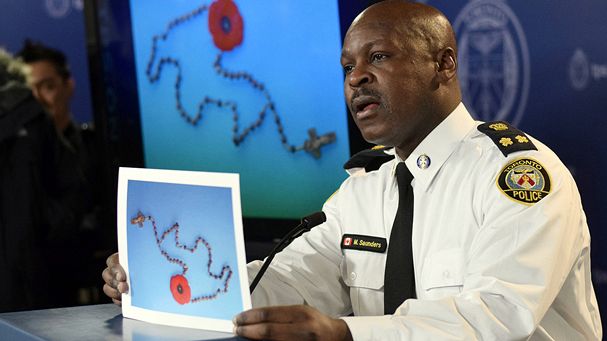 While media speculated the tunnel could be used to store weapons or explosives, or to give attackers access to the Pan Am site, Toronto police Deputy Chief Mark Saunders was dismissive.

“I was not overly concerned that ‘Oh my goodness this is going to be something horrific’,” Saunders told a news conference. “My concern is that I don’t know why this is here.”

Canada has been on heightened alert for terrorist activity since a gunman attacked the Parliament Buildings in Ottawa in October after fatally shooting a soldier at the nearby National War Memorial. The attack by a so-called “lone wolf” Canadian convert to Islam came two days after another Canadian convert rammed two soldiers in Quebec with his car, killing one.

Saunders said there is nothing to suggest the tunnel, which he noted was “very comfortable inside”, was used as a drug lab.

“It’s not your everyday find,” he said.

Twitter users, using the hashtag #terrortunnel, quickly offered up such possible explanations as a stunt by engineering students and the act of a Catholic wartime ghost. Others objected to the implicit bias in relaxing vigilance because a rosary was found rather than a Koran.

“(Islamic State) was hoping every Canadian would fall in and twist our ankle,” wrote one Twitter user.

Saunders said the tunnel had been used during the winter and construction appeared to be ongoing when it was discovered. Once forensic evidence had been removed, the tunnel was filled in to protect public safety, police said.