Burkina Faso was plunged into crisis in late October 2014 when tensions over the future of President Blaise Compaore boiled over, with protesters torching the country’s parliament.

Here we take a closer look at the story behind the unrest.

Burkina Faso is a landlocked country in West Africa. Its longest border is to the north with Mali. It’s surrounded to the east by Niger, and, to the south, by Ivory Coast, Benin, Ghana and Togo.

The country suffered a series of coups over the next two decades, before, in 1983, Thomas Sankara, nicknamed Africa’s Che Guevara, became the country’s leader, after an internal power struggle.

In 1987 Sankara was ousted and killed in a coup by close ally Blaise Compaore, the man at the centre of protests in 2014. 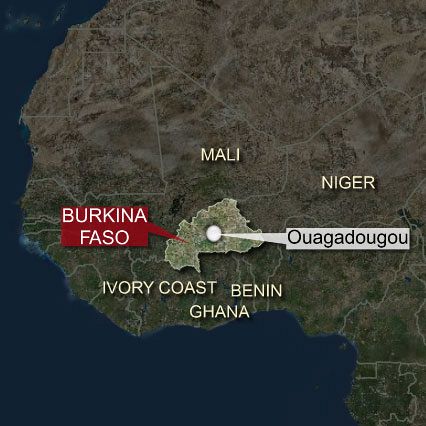 He introduced limited democratic reforms before being elected as president in 1991, without opposition.

Compaore, one of Africa’s longest-serving leaders, has served two seven-year terms before a tweak to the constitution allowed him to stay on for another two five-year stints.

How did the unrest come about?

The trigger for the violence was proposed constitutional changes to allow Compaore to stay in power for another five years.

In a signal of what was to come, members of the ruling party quit earlier this year to form a new political movement to challenge Compaore’s presidency.

How is Blaise Compaore viewed in the West?

The country has become a key player in the mediation of regional crises and is also an ally for the West in its operations against radical Islamist groups in West Africa, especially in northern Mali.

Compaore, 63, although an ally of France and the US, was close to former Libyan leader Muammar Gaddafi and Charles Taylor, ex-chief of Liberia who was found guilty of aiding and abetting crimes against humanity.

How is its economy fairing?

It’s the fourth-largest gold producer in Africa but also one of the world’s poorest countries, with a poverty rate of 46 percent.

What do the African Union think?

“The Commission calls for urgent and coordinated international action to ensure that the situation does not escalate any further. The Commission will continue to work with the Government and other stakeholders in Burkina Faso to ensure the restoration of lasting peace and order.”

Bernadette Meehan, spokeswoman for the White House, said in a statement: “The United States is deeply concerned about the deteriorating situation in Burkina Faso resulting from efforts to amend the constitution to enable the incumbent head of state to seek another term after 27 years in office. We believe democratic institutions are strengthened when established rules are adhered to with consistency. We call on all parties, including the security forces, to end the violence and return to a peaceful process to create a future for Burkina Faso that will build on Burkina Faso’s hard-won democratic gains.”