On June 28, 1914, heir to the Austro-Hungarian throne Archduke Franz Ferdinand and his wife Sophie, made a bold and controversial trip to Sarajevo, the capital of Bosnia, to inspect the imperial armed forces. Bosnia had once been part of the Ottoman Empire but was annexed by Austria-Hungary in 1908, a move unpopular with many Bosnians and neighbouring Serbia.

Ambitions of Slavic nationalism and resentment against the imperial rule led a group of young Bosnian Serbs to plot the Archduke’s assassination with the help of the Serbian organisation The Black Hand. As the royal car passed through the city a bomb was launched by one of the conspirators but it missed its target, injuring instead an officer and a few members of the public. 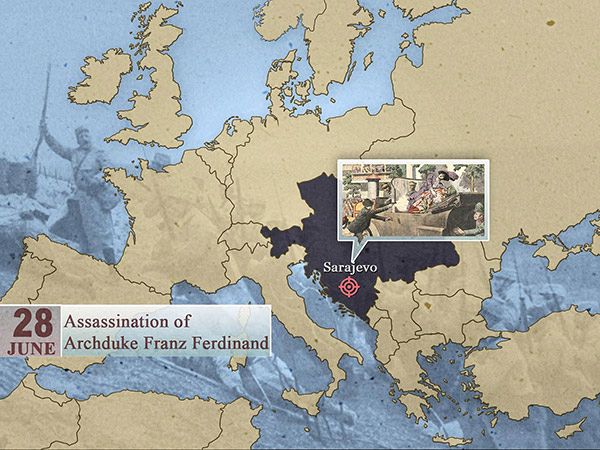 Despite the failed assassination attempt the royal couple continued their day with surprisingly little security and after lunch they decided to visit the injured officer. On the way the Archduke’s driver took a wrong turn and as chance would have it the car came face-to-face with Gavrilo Princip, a member of the conspirators’ group. Realising his mistake the driver attempted a hasty retreat but Princip seized his opportunity and shot the royal couple dead at close range. Before he was able to turn the gun on himself, Princip was tackled to the ground by bystanders. He was later arrested and sentenced to twenty years in prison, escaping execution because he was under 20 years old. He died in prison of tuberculosis four years later.

Austria-Hungary blamed Serbia for the attack and saw it as a chance to put an end to Slavic nationalism once and for all. But, with Russia a close ally of Serbia the declaration of war was held off until Kaiser Wilhelm’s Germany had pledged support to the Austro-Hungarian cause.

On July 28 Austria-Hungary presented Serbia with a list of ultimatums. But when Serbia agreed to all but two of the demands, Austria-Hungary declared war. In the days and weeks that followed it was the chain of alliances throughout Europe that brought so many countries into a conflict that would go on to claim millions of lives.