The political fight over gender equality has reached a new level in the United States, this time pitting gay rights against religious beliefs.

All eyes are on the western state of Arizona where Republican governor Jan Brewer is facing rising pressure on many fronts over a bill on her desk. The bill, passed last week by the state’s Legislature, would allow businesses to deny service to gay and lesbian people based on the religious beliefs of the business owner.

The question is whether it should be legal to discriminate people because their sexual orientation violates somebody’s religious belief. 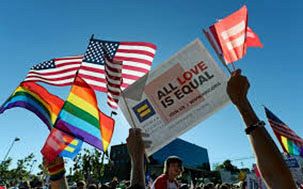 The battle lines on national television and on social media are clearly drawn: What some consider the defense of faith values is just a form of bigotry of the worst sort for others.

The Arizona legislation has caused a national uproar with the chorus of opposition growing each day, notably among moderate conservatives. 2012 Republican presidential nominee Mitt Romney was the latest prominent voice to weigh in and urge Brewer to veto the bill.

His fellow Republican John McCain, who lost the presidential election against Barack Obama in 2008 and who represents Arizona in the US Senate, tweeted to the similar effect, hoping that Brewer would veto the bill.

Brewer will likely spend the next day or more pondering Senate Bill 1062 before deciding whether to sign or veto the legislation. If she doesn’t reach a decision by the end of Saturday, it will automatically become law.

There is widespread speculation that Brewer will veto the bill, but she has not said how she will act, as is her longtime practice with pending legislation. 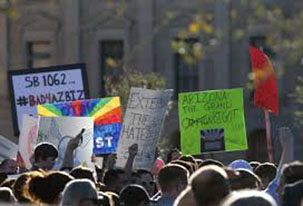 The bill was pushed by the Center for Arizona Policy, a social conservative group that opposes abortion and gay marriage. The group says the proposal simply clarifies existing state law and is needed to protect against increasingly activist federal courts.

The bill could have deep impacts for the state. Major companies have criticized the legislation, including Marriott Hotels, Apple, American Airlines and Yelp. Yelp CEO Jeremy Stoppelman wrote an open letter to Brewer.

Also watching the decision closely is the National Football League (NFL), as next year’s Super Bowl is set to be played in Arizona. The Arizona Cardinals, the NFL and the Arizona Super Bowl Host Committee all issued statements voicing disagreement with the bill.

“A key part of the mission for the Arizona Super Bowl Host Committee is to promote the economic vitality of Arizona,” the committee wrote in a statement. “On that matter we have heard loud and clear from our various stakeholders that adoption of this legislation would not only run contrary to that goal but deal a significant blow to the state’s economic growth potential.”

An estimated 350 people gathered outside the Arizona Capitol in Phoenix on Monday evening in a peaceful protest. They listened to speeches and many held homemade signs in opposition to the bill.

Similar so-called religious protection legislation has been introduced in Ohio, Mississippi, Idaho, South Dakota, Tennessee and Oklahoma, but Arizona’s plan is the only one that has passed. The efforts are stalled in Idaho, Ohio and Kansas.

Conservative Republicans stressed that the bill is not about discrimination but protecting religious freedom.

They frequently cite the case of a New Mexico photographer who was sued after refusing to take wedding pictures of a gay couple. They said Arizona needs a law to protect people in the state from heavy-handed actions by courts.

Another frequently cited example is a suit brought against an Oregon baker who refused to make a wedding cake for a gay couple.

The businesses were sued, but those efforts came under state laws that extended protected-class status to gays. Arizona has no such law protecting people based on sexual orientation.