In France, fighting against discrimination based on sexual orientation and the debate over legislating on same-sex marriage has been high in the headlines in recent months. Now comes the International Day Against Homophobia and Transphobia (IDAHO) on 17 May. This has been celebrated every year since 2005, with meetings, demonstrations and artistic events to raise public awareness about homophobia.

This kind of discrimination is still strong in many countries, and also violent. Some people are brutally anti-gay even where you might not expect it, such as in France, where public buildings have these words carved in stone: equality, liberty, fraternity. According to statistics, a gay person is violently beaten in France every three days, on average.

France took longer than several other western countries to legalise gay marriage, around the same time as New Zealand, joining a dozen states around the world that have done it. Others have alternative arrangements. In many countries, homosexuality is liable for heavy punishment, and can bring the death penalty in eight of them.

Acceptance of homosexuality has taken a long time to develop. The World Health Organisation only struck it from a mental illnesses list in 1990. It was 17 May.

It is still labelled as an illness in many places, such as some African and Arab countries, and in others it is treated as a crime.

In Russia, the law is not favourable, but neither does it explicitly condemn homosexuality. It was against the law until 1993 and was officially attributed to ‘mental disturbance’ till 1999. Surveys find that nearly three quarters of Russians today still feel homosexuality is immoral.

Ahead of the International Day Against Homophobia and Transphobia, euronews spoke to France’s Minister for women’s rights and government spokesperson, Najat Vallaud-Belkacem.

Giovanni Magi, euronews: How engaged is the French government in the fight against homophobia?

Najat Vallaud-Belkacem: The Prime Minister has given me the task of drawing up an action plan against homophobia which has to involve all state and local offices in order to take a comprehensive approach towards the fight against homophobia; and that has to be implemented across the board through our legal system, the police in the health system and in schools.”

“That’s why last October I presented a plan in which there were strong and important measures to better deal with the victims of homophobic violence, but also to prevent discrimination or violence linked to sexual orientation. First of all, we must stop minimsing violence people suffer because of their sexual orientation in order to help them come forward and press charges. Then, we have to improve our prevention measures because before violence erupts, we have to ensure that it’s not fed by prejudice and the rejection of others, and that mostly starts at school level.”

euronews: The people behind the International Day against Homophobia want the United Nations to pass a resolution on the subject and identity papers that recognise transsexuals. Is France supporting such measures?

NVB: “In relation to the universal decriminalisation of homosexuality, an extremely important fight in which all the world’s progressive country must be involved, know that France, in a certain manner, has decided to take part. The president told the United Nations’ general assembly last September that this fight has to be a global priority. For those who’re trying to change sex, we’ve asked the National Commission for Human Rights to intervene, and it’s due to give us its response before summer, to see how we can facilitate the lives of those who want to change sex.”

euronews: Some say France’s decision to adopt same-sex marriage laws has critically divided the country. What do you think?

NVB: “France is a country which loves to debate and look at its social make-up. It’s interesting because if you listen to observers, analysts and journalists, you could easily have impression that we’re weighed down with such matters but in reality we’re a country which adores that. France is a country that’s very politicised in the good sense of the term because politics is something noble, and therefore there will be splits in society regarding marriage for all; there’s nothing really surprising in that. On the other hand, for me what we can criticise is the attempt by some to prevent a legitimate government from applying its widely publicised programme. We have institutional and political legitimacy to implement these changes. But all that’s fortunately behind us now. The debate was not easy but the text has been voted on, that was truly a beautiful moment. I think that since I’ve been here, it has been one of the happiest moments I’ve experienced because we really had the feeling of living up to the Republic’s motto, and that’s why we’re in politics.” 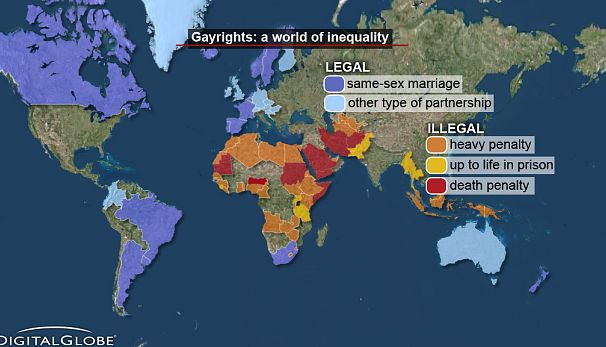