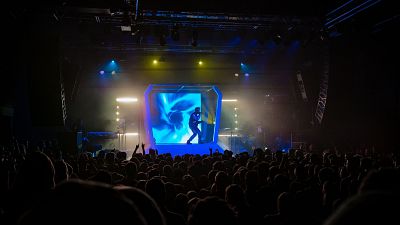 French singer-songwriter Laetitia Shériff is travelling around the US on the trail of musical history and culture. At her first stop of Minneapolis, a city with a proud musical heritage, she found a welcome so warm it has spawned its own (very complimentary) stereotype: “Minnesota Nice”.

Laetitia discovered there is no shortage of locals who live up to the Midwest epiphet, offering top tips for tourists and sharing the hidden gems of their city.

Minneapolis has no fewer than 15 lakes within the city limits. “One of the first things that amazed me is that you can be in the heart of downtown one minute and a world away the next... walking through beautiful tree-lined parks, visiting the stunning 11-acre Minneapolis sculpture garden or taking a bike ride down the epic Mississippi river," said Shériff.

The area’s lakes and surrounding countryside make Minneapolis a great summer spot, but the city really comes into its own in the winter. The warmth of the Minneapolis welcome may well have evolved as fortification against the cold of its winters –the average temperature in January is –5.

Fortunately, the modern city was constructed with this in mind. Downtown, heated “skyways” mean you don’t have to be exposed to the elements when walking between buildings. If you wrap up warm though, the great outdoors has penty to offer even in freezing temperatures, from dazzling winter scenes and ice fishing to pond hockey.

Prince’s Paisley Park: a shrine to a music legend

Paisley Park is the home, studio and creative sanctuary of iconic artist Prince, who was born and raised in Minneapolis. The city was the start of his musical journey and even as he rose to global fame, he remained close to his roots in Minnesota. Paisley Park was more than his home – he opened its doors for live music events, invited other musicians to record there and had always wanted it to be open to the public. The extraordinary estate is now a museum, giving fans unprecedented access to Prince’s life.

“Paisley Park is a tomb, a museum, a gem,” says Laetitia. “I was able to see a lot of things: his motorcycles, his guitars, his costumes, his concert space, the giant hall where he made his films and videos... it really is a sacred place."

Not to be missed: a countdown of our favourite Minneapolis destinations

With its vibrant arts scene, unique natural setting and friendly locals, there's so much to see and do in Minneapolis. Here are Laetitia’s top picks.

1. In addition to the incredible Paisley Park, there are several other Prince sightseeing spots not to be missed by fans visiting the city, including the historic performance venue First Avenue – "your downtown danceteria" since 1970 – which has attracted big acts ever since it was converted from a Greyhound bus station. Prince filmed multiple scenes for Purple Rain at the venue.

2. Laetitia tucked into the “best pancakes of her life” at Mickey's Diner. The delicious all-American fare has been served up there since 1939, 7 days a week, 24 hours a day. “The owners Eric and Mary told me their story just as an uncle and an aunt would. I was touched by their unbroken passion and kindness,” says Laetitia.

3. Minnehaha Park is one of Minnesota's oldest and most popular parks. It is within the city limits but will transport you to another place with its impressive 16-metre waterfall (exquisite when iced over in winter), striking limestone bluffs and stunning river views. From hiking and boat rentals in the summer, to sledding and ice fishing in the winter, the park is an unexpected treasure in the middle of a city.

4. If you like shopping, you will love Minnesota, whether your tastes are commercial or independent. Fans of big brands will find a veritable heaven in the vast Mall of America. Those who prefer to hunt for gems off the beaten path will appreciate the thriving Mid-Western independent vinyl store scene to be found at places like Fifth Element or Know Name Records.

We’ve put together a locally inspired soundtrack to accompany your visit to Minneapolis.

• “Paisley Park” (1984) from Prince’s Around the World in a Day album, in which he envisaged his future sanctuary.

• "Minneapolis", another world-famous son is Bob Dylan. He released “Like a Rolling Stone” in 1965 and it is said to have completed his transformation from folk singer to rock star.

• Jazz pianist Big Tiny Little was born in Minneapolis. His recording of “Twelfth Street Rag” (1959) was immortalised in the theme of a long-running TV show hosted by Joe Franklin.

• The Stone Temple Pilots recorded “Lounge Fly” (1994) at Paisley Park, and it is hard to escape the Prince reference in the title of the Purple album it appeared on.

• In 2007, the Minnesota Orchestra, under Osmo Vänskä, won a Grammy Award for Best Orchestral Performance, for their recording of Beethoven’s Ninth Symphony.

• Part of U2’s 1981 October album was written at First Avenue, Minnesota during an extended sound check. The song of the same name is a good place to start.