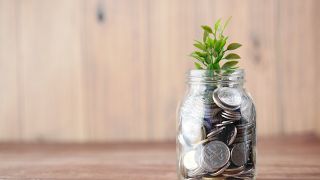 Choosing a green pension could be better for the planet than not flying, going vegetarian and using renewable energy combined.   -   Copyright  Unsplash
By Euronews  •  Updated: 25/10/2022

If you're searching for ways to reduce your impact on the environment, your bank account might not be the first place you look.

But considering how and where you keep your money could have a big impact on your carbon footprint.

So is there anything you can do about the environmental impact of your finances?

Could switching to a green bank reduce your environmental impact?

It came after campaigners voiced concerns about how banks are helping to lock in climate-damaging emissions. They welcomed the move from Lloyds and called on other banks to follow suit.

HSBC has recently had misleading climate ads it ran before COP26 banned by the UK's advertising watchdog. It said that any future campaigns must disclose the bank's contributions to climate change.

It shows that it can be hard to know how your bank may be contributing to the climate crisis - there's no simple answer. But there are tools out there that could help in your search for a less environmentally damaging place to store your money.

Sites like bank.green, an online tool put together by volunteers, allow you to compare the environmental credentials of different banks. Those rated as 'Great' do not fund fossil fuels, its creators say, with a sliding scale down to 'Worst' for those that heavily fund fossil fuel projects.

Switching to a green pension could be a 'powerful weapon'

Switching to a sustainable pension could be 21 times more powerful in the fight against climate change than giving up flying, becoming vegetarian and choosing a renewable energy supplier combined.

According to research from the Make My Money Matter campaign from earlier this year, greening your pension might be the single most effective action an individual can take to reduce their carbon footprint.

For those with an average size pension pot (£30,000 or €34,415 in the UK) transitioning to a sustainable option could save as much as 19 tonnes of carbon a year, the study found. If you have more saved, at least £100,000 (€114,718), a greener pension might cut as much as 64 tonnes of emissions every year - that’s nine years worth of the average UK citizen’s carbon footprint.

Our pensions are the most powerful weapon we have to help protect the planet.

The Make My Money Matter campaign, co-founded by film writer and director Richard Curtis, believes it is important that where our money is invested complements our other environmental actions, rather than undermining them.

“We have taken real collective steps in our society to become greener in our day-to-day lives. However, I helped create Make My Money Matter after being alerted to the fact that our pensions could be undoing all of our hard work without us even knowing,” says Curtis.

“These findings confirm just how important our money is in the fight against climate change. In fact, our pensions are the most powerful weapon we have to help protect the planet.”

How can greening pensions help cut our carbon footprint?

Although we might like to think that our pension contributions are simply locked away for us to use once we retire, the reality is that this money is being invested. Despite many companies now choosing to divest and individuals being more aware of sustainable options, it’s likely that some of that money is financing the use of fossil fuels.

More than half of adults in the UK now want their pensions to help tackle climate change, according to a study from earlier this year by Royal London. But only 15 per cent currently invest it responsibly.

“We need the entire UK pensions industry to go green – making their default funds more sustainable so all savers can have a pension to be proud of,” adds Curtis.

“As individuals, we have a critical role to play in driving this change by showing providers that we want our money invested in a way that does good, not harm and so that we can retire into a world that isn’t on fire.”

How could a green pension be more effective than other environmental actions?

To work out how much carbon switching to a green option could cut, Make My Money Matter calculated the reported emissions from companies each pension invested in. It looked at both the sectors and countries of the businesses included.

The amount of carbon linked to each £1,000 (€1,160) invested for both a standard pension and a sustainable one was worked out using this data. The emissions saved from switching to a green pension were then compared to those from other environmentally friendly actions such as going vegetarian, giving up flying or using a renewable energy provider.

Alongside the Make My Money Matter Campaign, the study also involved UK insurance company, Aviva and Route2, a data analytics company. Nick Robins, professor in practice for sustainable finance at the London School of Economics says that it is a “very powerful piece of analysis”.

“Shifting investment is an important way of sending signals to companies to accelerate action to support the net-zero transition,” he explains.

“The study points to the need for individuals to build up their capacity to make informed climate choices over all aspects of their lifestyle, not least finance.”

Disclaimer: This article should not be used in place of proper financial advice.