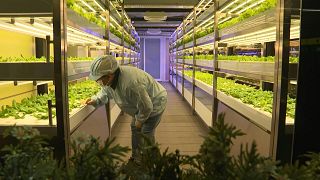 Advanced and efficient vertical farming methods are being harnessed to help feed commuters with fresh produce.

Located at capital city Taipei’s Nanjing-Fushing Station, the 40 square-metre ‘Metro Fresh’ hydroponic farm grows lettuce under LED lighting in a sterile environment to eliminate the use of pesticides and herbicides.

"One thing that most people are worried about is the unavoidable use of pesticides in traditional land based farming,” says Julia Yang, an executive of Unimicron Technology, the company behind the metro farm.

They have used high tech equipment to regulate conditions such as light, temperature and nutrients which are most beneficial to the growth of the plants.

“We use hydroponic farming and thus have no insect egg problem," Yang says.

"Everyone’s biggest fear when having a salad is insect eggs.”

Why is vertical farming necessary?

Vertical indoor farms, also known as "smart farms", have become increasingly popular in Taiwan as the island's young population are reluctant to enter the agricultural workforce.

Technology sector jobs are more in demand for younger people, as they are better paid and offer more opportunity for growth. This move to a different kind of work has benefited the tech sector in terms of research and technological experimentation.

Smart farms are less labor intensive and use technology to increase yields and mitigate weather fluctuations.

Taiwan has a population of 23.57 million people and a surface area of only 36,197 km². This means that being able to use space as efficiently as possible is crucial for the nation's growth and self-sufficiency.

These technologies could also prove to be useful in other densely populated countries such as Singapore, Monaco, and Malta.

Watch the video above of Taiwan's metro station farm.