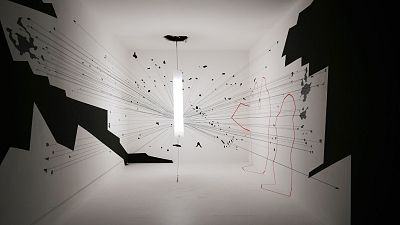 The Louisiana Museum in Denmark are presenting an exhibition showing the work of the research group, Forensic Architecture   -   Copyright  Louisiana Museum of Modern Art
By Theo Farrant  & AP  •  Updated: 23/05/2022

The Turner Prize-nominated Forensic Architecture, a London-based collective famed for using digital techniques to meticulously recreate crime scenes is showcasing it work in a new exhibition.

The unique exhibit is being hosted by Denmark's Louisiana Museum of Modern Art, north of Copenhagen.

The group, which includes artists, architects, lawyers and researchers, creates 3D visualisations to conduct spatial and architectural analysis of human rights violations, such as violence committed by states, police forces and militaries.

"Architecture is a way of seeing the world, a way of analysing it," explains the group's Israel-born director, Eyal Weizman.

"Think about it, most wars, most conflicts happen in cities, amongst buildings and homes. And actually modelling those scenes in three dimensions helps us understand and helps us see things, helps us synchronize videos and take witnesses in virtual reality through the scene of the crime. So, when the crime is happening in a city, architecture is the way to look at it," he added.

What does the exhibition explore?

This new exhibit looks at how the collective uses methods and tools to conduct spatial and architectural analysis of particular incidents - from scribbled notes and witness testimonies, to 3D renderings.

One section of the exhibition explores the group's so-called "Modes of Sensing", which function as sensors and register changes to the environment - from cracks in Gaza ruins to tear gas clouds.

Since 2018, Forensic Architecture has been working with machine sensing to train algorithms to identify objects such as tear gas canisters, military and police vehicles, banned munitions and chemical bombs.

"The Forensic Architects work in the same way as normal architects, use the same tools to do things like this, and they use it, in a way they're telling the story about different cases," says the exhibit's curator Kjeld Kjeldsen.

"They are part of the time and the history today. And for me, what's happening in the world just now, this exhibition and the way they're working, is a new way of using architecture, an architectural way of seeing the whole world."

The director Eyal Weizmann says that the forensics group are now supporting a Ukrainian research group, called Centre for Spatial Technologies, to work on several recent incidents in the war-torn country, including the missile strikes on Babi Yar Holocaust memorial site and Mariupol theatre, among others.

Check out the video above for a look inside the exhibition