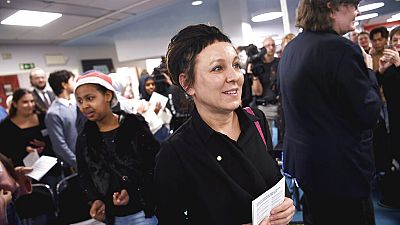 The Polish Nobel laureate Olga Tokarczuk is back among the finalists for this year's International Booker Prize alongside authors from Norway, South Korea, India, Japan and Argentina.

Tokarczuk’s sprawling 18th-century epic "The Books of Jacob", a hefty 912-page tome that took translator Jennifer Croft seven years to render in English, is a favourite to win the £50,000 (€59,848) reward this year.

The author received death threats, and her publishers hired bodyguards for her for a time, on its original publication in 2014 as members of the Polish extreme right took exception to its portrayal of dark parts of the country's history.

Other books on the shortlist include Geetanjali Shree's Tomb of Sand, the story of a convention-defying 80-year-old woman and the first Hindi-language book to be a finalist since the award began in 2005.

Others include crime story "Elena Knows", by Claudia Piñeiro, "Heaven", the story of a bullied schoolboy by Mieko Kawakami, the philosophical "A New Name: Septology VI-VII" by Jon Fosse, and "Cursed Bunny": a book of surreal short stories by South Korean writer Bora Chung.

Chair of judges Frank Wynne said: "These six titles explore the borders and boundaries of human experience, whether haunting and surreal, poignant and tender, or exuberant and capricious."

"In their differences, they offer glimpses of literature from around the world, but they all share a fierce and breath-taking originality that is a testament to the endless inventiveness of fiction."

The winner will be announced on May 26.

Why you need to watch Eurovision, according to the superfans