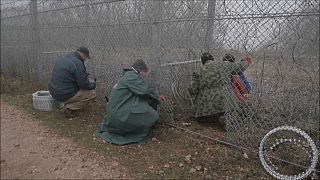 Bulgaria's Interior Ministry Chief Secretary,  Petar Todorov, has visited a fence on the border with Turkey.

Bulgaria's Interior Ministry Chief Secretary,  Petar Todorov, has visited a fence on the border with Turkey.

The press was invited to accompany him as he explained what he called the unprecedented migrant pressure.

Todorov said the fence is always being cut and is not working as it should be as a deterrent.

"That is why its maintenance is a continuous process," said the minister. "Last year, the fence was being rebuilt by colleagues from the army, and since December we have had dedicated staff."

The director of the Bulgarian Border Police, Rositsa Dimitrova, said officers prevented the illegal crossing of around 164,000 people last year.