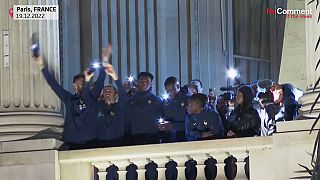 Lionel Messi and the Albiceleste paraded in the streets of Doha to celebrate their victory over France in the final. The fans were right there with them to congratulate them on their win.

Meanwhile, the Croatian team was welcomed in Zagreb with fireworks, flags and cheers. Despite not making it to the final, they came home heroes after securing 3rd place in the competition. They beat Morocco in the 'little final'.

And finally after returning to Paris in second place, 'Les Bleus' greeted their fans at Place de la Concorde to thank them for their support. Despite a heartbreaking loss against Argentina, the French public cheered on their champions.