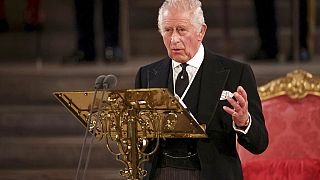 King Charles III pledged Monday to follow his late mother’s example of “selfless duty” as he addressed lawmakers from both houses of parliament in London before he was to fly to Edinburgh to be with the late queen's coffin as it lies at rest in the Scottish capital.

Hundreds of lawmakers crowded into the 1,000-year-old Westminster Hall at the Houses of Parliament for the service, rich in pageantry.