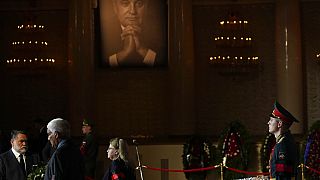 Russians on Saturday bid farewell to former Soviet leader Mikhail Gorbachev, who died earlier in the week at the age of 91.

Russians on Saturday bid farewell to former Soviet leader Mikhail Gorbachev, who died earlier in the week at the age of 91.

Mourners filed past his coffin in the Pillar Hall of the House of the Unions to pay their last respects.

The iconic mansion near the Kremlin in Moscow has served as the venue for state funerals since Soviet times.

Gorbachev, whose drastic reforms helped end the Cold War and precipitated the breakup of the Soviet Union, is set to be buried in a relatively low-key ceremony later on Saturday.

He will be laid to rest at Moscow's Novodevichy cemetery, next to his wife, Raisa.

The Kremlin's refusal to declare a state funeral reflects its uneasiness about the legacy of Gorbachev.

Although venerated worldwide for bringing down the Iron Curtain, he is reviled by many at home for the Soviet collapse and the ensuing economic meltdown that plunged millions into poverty.

Russian President Vladimir Putin will not attend the funeral ceremony.

On Thursday, he privately laid flowers at Gorbachev's coffin at a Moscow hospital where he passed away two days earlier.

The Kremlin said the president's busy schedule would prevent him from attending the funeral.