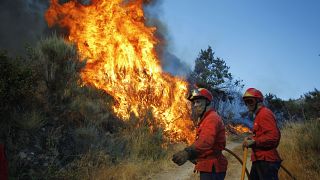 The fire that reignited on Monday in Serra da Estrela is one of the most worrying active fires in the country at the moment. According to Civil Protection, several villages in the line of fire have already been evacuated.

The fire affects the municipalities of Manteigas, Covilha and Guarda. In the field the are more than 1,000 firefighters, supported by 330 vehicles.

The National Commander of Civil Protection, Andre Fernandes, informs that the origin of this fire was three ignitions simultaneously and there is still no confirmation that it was a re-ignition or criminal hand.

More than 16 thousand hectares have burned in the Serra da Estrela fire, according to the European monitoring system Copernicus. This wildfire is one of the longest forest fires ever to have been recorded in Portugal.